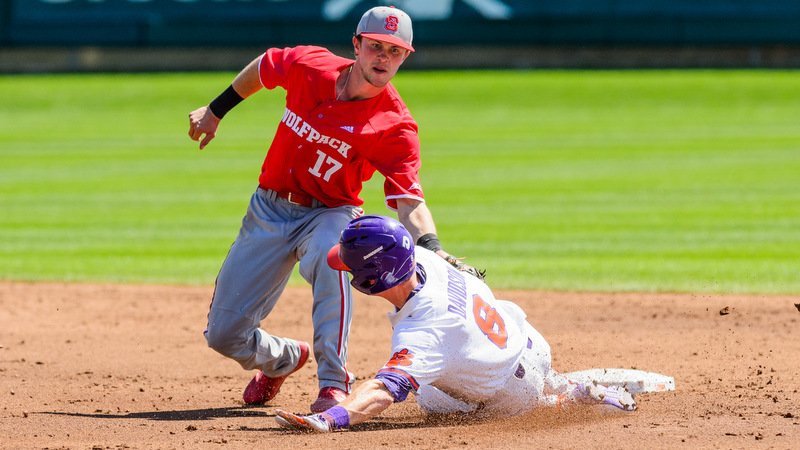 CLEMSON – The temperatures at Doug Kingsmore peaked in the mid-70s Sunday afternoon, but unfortunately for Clemson as the temperature heated up so did the N.C. State bats.

Jake Higginbotham gave up three of N.C. State’s runs, but Ryan Miller picked up his first loss of the season and dropped to 2-1.

Grayson Byrd reached base twice and scored twice, while Kyle Wilkie had a double and was credit with two RBI.

Clemson head coach Monte Lee said he was pleased with the way his team played Sunday, but the longball was the Tigers' demise.

"Congratulations to N.C. State. They had a great weekend. Obviously, they outplayed us in the first two ballgames," Lee said. "Today's ballgame could've gone either way. I thought it was a very competitive ballgame but you have to give them credit. They beat us with the long ball today. They hit three home runs. Wilson is a dangerous hitter and they have a formidable lineup. They've got a really good lineup. I thought we threw the ball fairly well. Higgie probably wasn't at his best. I thought our bullpen did a good job and only gave up one run between Miller, Huggins, and Gilliam. Offensively, we jumped out to a hot start but then we couldn't really find a way to put anything together after that."

State once again wasted no time jumping on Clemson. Will Wilson hammered a 0-1 pitch into the parking lot behind the Chapman Grandstands for a 1-0 lead in the first.

Logan Davidson answered in the bottom half of the frame with a solo shot of his own off the scoreboard in center field to tie the game at 1-1. It was Davidson’s third home run of the season.

Clemson continued its hot hitting in the second inning.

Drew Wharton reached base via a leadoff walk and came around to score on a double to the right-field wall by Grayson Byrd, who took third on the throw. Kyle Wilkie hit a fly ball to deep right to plate Byrd and give Clemson a 3-1 lead after two innings.

Higginbotham walked the first batter of the third inning who scored on a Josh McLain home run to left to tie the game at 3-3.

With two outs in the fourth, Byrd reached base via a fielding error by the second baseman. Wilkie followed with a shot into the right center gap to plate the run and give Clemson a 4-3 lead.

After giving up a five-pitch walk to start the sixth inning, Higginbotham’s day was done and Clemson turned to senior righty Ryan Miller.

Miller immediately gave up a single to left center and a late throw to third by Wilkie on a bunt attempt loaded the bases with no outs. Miller got a ground ball double play, but conceded the run to tie the game at 4-4.

Higginbotham allowed four run – all earned – on two hits and three walks in five innings of work. He struck out five.

Wilson hit his second home run of the game with one out in the eighth to give N.C. State a 5-4 advantage.

Going into a long road trip, Lee said he and the coaches have to find a way to get Clemson offense going.

"The bottom line is we have to swing the bats better. We have to score more runs. We have to find a lineup and find the right message - if there is one - to get our guys going," Lee said. "We have to keep running them out there and hopefully get some confidence going and we'll be okay. It's obviously tough. It's a tough pill to swallow right now losing three games at home to N.C. State. They were the better team and they deserve it. We just have to keep competing and keep working, stay positive and hopefully, we can find a way to get things turned in the right direction this upcoming week."

The Tigers will take to the road for a five-game road trip beginning Tuesday in Conway against Coastal Carolina in a 6 p.m. tilt. Clemson then travels to Louisville for a three-game weekend series before heading to Greenville for a game against Furman at Fluor Field.