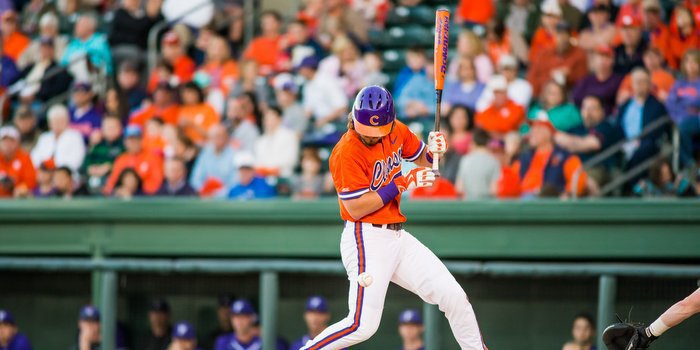 K.J. Bryant had a big three-run homer in Tuesday's win

The message was clear: Yes, it’s close to midnight and yes there are fans and family waiting for you. Yes, the media wants to ask questions. Yes, we have a game on Wednesday at Western Carolina and everybody wants to go to bed. Yes, we beat Furman tonight. But none of that matters if you don’t play the game the right way.

Lee’s conversation with his team was long and at times it was very animated, and when he finally met with the media, he detailed his talking points.

“Just to be aggressive. In the last few games, I think we've gotten away from being aggressive in the strike zone,” Lee said. “Really just trying to get back to the basics from a pitching standpoint - get hits in the strike zone, throw strikes, force them to swing the bat, force them to beat you by swinging the bat. Their kids and sometimes our guys are trying just a little bit too hard. They get behind in the count, and they start to overthrow instead of pitching. We've got to get back to pitching. We won a game tonight that we were very, very fortunate.”

Clemson came from behind to defeat the Paladins 9-7, but Lee wasn’t in a mood to celebrate. 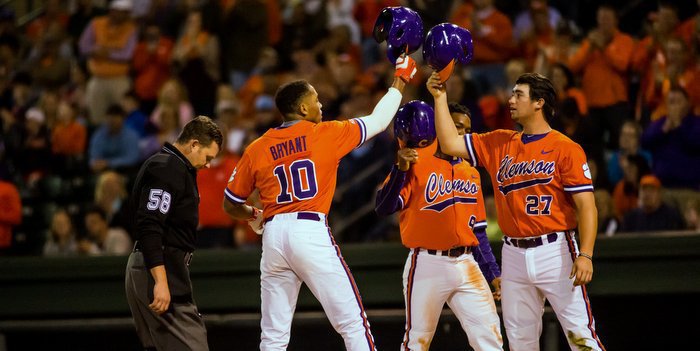 K.J. Bryant had a big three-run homer in Tuesday's win "

“I thought Furman outplayed us and they gave us some runs based on some mistakes,” he said. “We've got to get back to playing baseball to where when we win we beat the other team. We beat them because we out-execute them - pitching, defensively and offensively. Tonight, outside of accumulating quite a few walks and scoring some runs based on some mistakes, we didn't do a lot. K.J. (Bryant) had a big home run. Defensively, we played okay.

“Pitching wise, we threw the ball okay. (Pat) Krall was really good. He saved us, but we can't keep dipping into that well in the sixth inning,” he continued. “We've got to get deeper starts. Overall, we've got to pitch better. We've got to play better defensively, and we've got situational hit better. We've got to execute our swings better with runners in scoring position. We found a way to win, but we've got to be aggressive. Our guys right now and over the last few games are pressing a little bit, and that's been uncharacteristic of us through the first 20 games, but we had a good talk after the ball game, and I think the guys will respond very well. We've got a good group of kids and are extremely coachable, and hopefully, we can move into tomorrow and play a better game of baseball.”

Outfielder Reed Rohlman was asked about the lack of aggression over the last week, and he said the players just need to regain their composure.

“It's baseball, I guess. We have gone away from staying aggressive, and I'm a big part of that lately,” Rohlman said. “We just need to calm down and take a deep breath. We all know our approaches. It's just something we need to work on this week to be ready for this weekend. It's baseball, and everyone goes through it.”

However, Rohlman cautioned that being aggressive doesn’t mean you swing at every pitch.

Lee said the Tigers – who are 6-0 in midweek games this season after going 7-8 last season – will be fine as long as they continue to play the game the right way.

“The key for us is not letting one mistake lead to ok now I'm going to try to do too much on defense or on the mound. I just have to keep pitching. I made a good pitch and I got my ground ball and we just didn't make a good play,” Lee said. “As a defender, the ball may be hit to me on the next pitch so I've got to be ready and move on from it. The big thing is we just can't let things snowball on us. I think part of that is when you have such a great start as we've had, we haven't run into this a whole lot, but when we have the only way you're going to get out of those types of things is just by continuing to play - stay relaxed, be aggressive, keep pitching, keep making plays. It will all shake out in the game of baseball if you have a good approach and don't try to put too much pressure on yourself. I think our guys are putting a little too much pressure on themselves right now.”