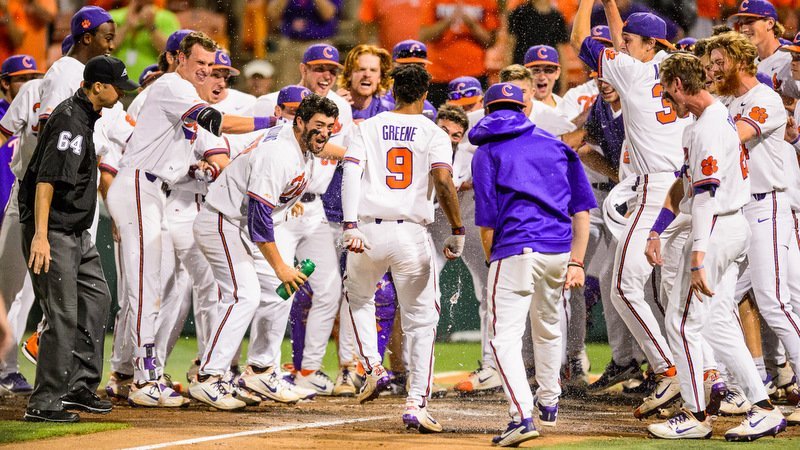 CLEMSON – Jordan Greene found another nut and We Will Rock You worked its magic against Florida St. again.

Greene launched the first pitch he saw in the bottom of the ninth over the wall in left, standing to admire his shot before turning to his teammates with his arms outstretched, leading No. 6 Clemson to a 5-4 victory over No. 15 Florida St. in the finale of a three-game series Monday at Doug Kingsmore Stadium.

Greene entered the game as a pinch-hitter in the seventh but found his heroic touch in the ninth. After his first homer of the season, Greene famously said, “Even a blind squirrel finds a nut now and then.”

He found his nut and left Florida St. to pick up the empty shell. Heading into the bottom of the ninth, the loudspeakers played We Will Rock You, brining back memories of the football win over the Seminoles when DeAndre McDaniel picked off Christian Ponder.

The first few innings featured reviews, a shouting match between head coach Monte Lee and the home plate umpire and enough missed calls to last an entire homestand. There were also no runs scored, but that changed in the bottom of the third.

Robert Jolly bounced a single up the middle to start the frame, and Logan Davidson launched a 1-0 fastball from FSU starter Cole Stands over the wall in left-center for a 2-0 lead. The homer was the ninth of the season for Davidson, good for third on the team.

An error and a double into the corner led to a quick run for the Seminoles in the fourth, but Higginbotham wiggled out of trouble with back-to-back strikeouts to keep the score at 2-1.

Kyle Wilkie had an inning to forget in the fifth. Mike Salvatore walked on four pitches to lead off the inning, and Rafael Bournigal laid a bunt down in front of the plate. Salvatore got a late break off of first and Wilkie attempted to force Salvatore at second, but the throw sailed into centerfield, putting runners at second and third with no out.

Steven Wells doubled to right center, tying the score at 2-2, bringing up Jackson Luecke. Luecke bounced a ball down the first base line and Wilkie threw that ball into right field. Bouringal scored, Luecke advanced to second and Wells advanced to third. That brought up the strangest play of the night in a night of strange plays. With Cal Raleigh stepping to the plate, the Tigers pointed Raleigh to first for an intentional walk. That’s allowed this season in Major League Baseball, but not in the college ranks. Hodges, still struggling, allowed Raleigh to take off his gear and go to first before FSU head coach Mike Martin complained.

Raleigh was brought back to the plate, where he had to strap on his protective batting gear. Raleigh walked on a 3-2 count, and the ball bounced away from Wilkie, allowing the runner to score for a 4-2 lead and putting runners at the corners with one out. Higginbotham got a strikeout for the second out, but was then replaced by reliever Ryan Miller, who got out of the inning without further damage.

Higginbotham deserved a better fate, pitching 4 2/3 innings. He gave up four hits and four runs, but none of the runs were earned.

Miller danced in an out of trouble over the next few innings, holding the Seminoles at bay in hopes that the offense could mount a charge. The charge came in the bottom of the seventh and had Beer all over it.

Wilkie lined a two-out single to center, and Beer made the Seminoles pay with a line drive shot over the wall in left-center for a two-run homer, tying the score at 4-4. The homer was the 14th of the season for Beer, tying him with Williams for the team lead.

The Seminoles got a two-out single from Raleigh in the ninth, and Drew Mendoza launched a ball into the gap in left-center. Sam Hall, who started the game at second base but moved to left field to start the ninth, ran the ball down in the gap and made a sliding catch going into the wall to preserve the tie.

We're dreaming with you, Jordan. pic.twitter.com/AOzDsgznhZ