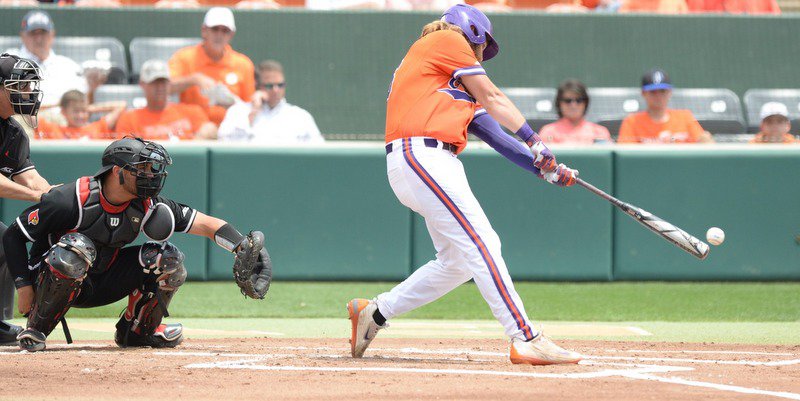 CLEMSON – Clemson got plenty of hits, they just couldn’t get one when it mattered.

No. 2 Louisville scored three unearned runs and Clemson left 16 runners on base as the Cardinals won the first game of a three-game series 4-2 at Doug Kingsmore Stadium Friday afternoon.

The Cardinals got a run in the top of the first when Colby Fitch homered to deep right for a 1-0 lead.

McKay struck out the first two batters in the first, but the Tigers loaded the bases with a double and two walks. Andrew Cox struck out to end the threat, and Louisville led 1-0 at the end of the first.

Barnes hit a batter and walked a batter to lead off the third, but after getting McKay to strike out looking for the second out it looked like he would get out of the inning. Barnes induced a ground ball from Drew Ellis, but shortstop Logan Davidson let the ball bounce into left for a two-run error and the Cardinals led 3-0.

A Davidson error cost the Tigers again in the fourth. A single and a walk with one out put runners at first and second, but a ground ball to Cox forced the runner at second. Davidson took the throw at second and tried to relay to first, but threw it away and Louisville had another run for a 4-0 lead. 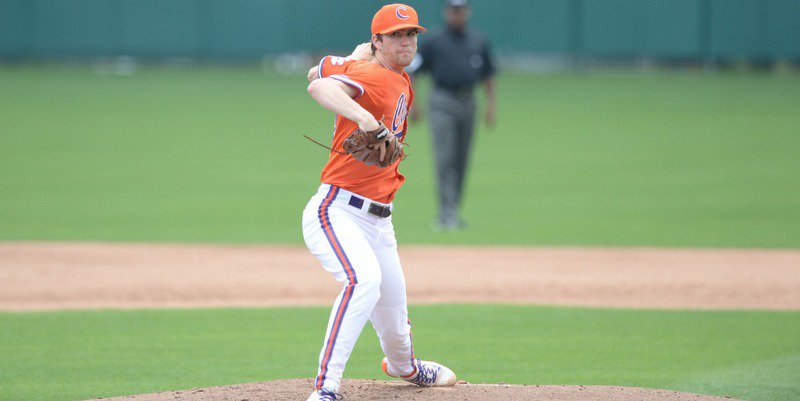 McKay’s day was done after five scoreless innings. He gave up five hits, walked three and struck out seven in 100 total pitches. He was replaced by Sam Bordner, who entered the game with a 30-inning scoreless streak that spanned 17 games. It took the Tigers just four batters to end that streak.

Cox doubled off the left field wall to lead off the inning, moved to third on a long fly ball to right by Jordan Greene and was still there with two out. That brought up Kyle Wilkie, who laced a single to right, scoring Cox to make it 4-1. Davidson and Rohlman each walked, and Pinder singled off the second baseman to score Wilkie, making it 4-2. Beer popped out to end the inning after Louisville brought in lefty reliever Adam Elliott.

The Tigers had their chances to score runs, but left two runners on base in the seventh. In the eighth, a walk, a hit batter and a single loaded the bases with nobody out. That brought up Beer, who sliced a shot to third. The third baseman threw to home for the force, and Beer was then thrown out at first to complete the double play. Williams flied out to end the threat and the inning.

The Tigers had a final chance in the ninth. Cox led off with a single to right and quickly moved to second on a wild pitch. However, Greene flied to right and Robert Jolly (pinch-hitting) rolled out to second. With Cox at third, that brought up Wilkie, who grounded out to end the game, predictably, with a runner in scoring position.

Game two of the series is set for 4 p.m. Saturday.

"Maybe tomorrow we can find a way. We need somebody to step up and deliver a big blow with runners on base and I think everybody will relax and we’ll be much better," Lee said. "The team is obviously hurting. It was a tough one, but we’ve got to find a way to come back and be ready to go tomorrow. We’ve got (Alex) Eubanks going and he’s as good as it gets when he’s on and he can get us right back in this series tomorrow. Then we’ve got (Pat) Krall going. That’s the way we’re looking at it. Hopefully, we can learn from this, be ready for tomorrow and be better from it."

Clemson vs. Louisville game one box
Get the latest Clemson gear right here!
Comment on this story