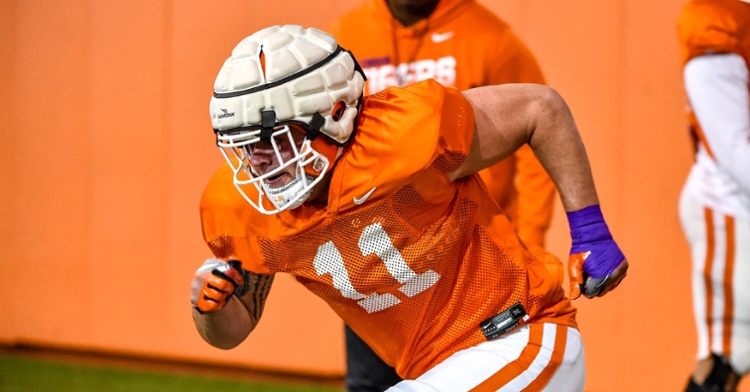 CLEMSON – It’s been said before, but we will say it again. Clemson’s defensive line has a different look to it this season.

The addition of freshmen Demonte Capehart, Myles Murphy, and Bryan Bresee adds to a group of veterans that look older, more experienced, and a little bigger.

Head coach Dabo Swinney smiled when he was asked about the line, and praised Xavier Thomas before running through a list of the players that have already flashed through the first five practices of the spring.

“Xavier Thomas is a million times ahead of where Vic Beasley was. We just forget and sometimes these guys have such unrealistic expectations on them and it's a hard game and there is a lot to learn,” Swinney said. “But I am super proud of him. He has taken ownership of what he needs to do to get better and he's practicing hard and he's doing well. As is KJ and Mascoll. That whole group. That whole room is different. KJ (Henry) and (Justin) Mascoll? Man, those two guys are awesome and then you throw in Xavier and Justin Foster is Steady Eddie. He looks like a different guy. He has a confidence to him that I have not seen in him before. He has real confidence. And that comes from all the experience he has, and he is a very mature and focused young man. The game has slowed down for him. Cape, and Bresee, and Myles Murphy? You can't help but notice them.”

He loves what he’s seen out of the true freshmen and redshirt freshmen.

“And then you throw Myles Murphy in there, who is kind of like X (Thomas) when he first got here, you just can't help but notice him athletically,” Swinney said. “But he has a great foundation as a football player. X didn't have a great foundation as a football player coming in here. And he figured that out. He is self-aware of that. He has really built a good foundation and I think he is ready to step in and be a more consistent player. And then Greg Williams is a guy that we are going to look at in three or four years and he's Kevin Dodd. Where did that guy come from? He is one of those developmental guys that has a bright future for us. It's a good group and Ski (Lemanski Hall) is doing a phenomenal job with them and we are in a different place than we were last year.”

Swinney said the three freshmen still have a lot to learn but are eager.

“They are big. They are big and athletic and physical. They have a lot to learn,” Swinney said. “But they just have natural gifts. Those guys have played ball a long time. But those guys are as advertised. They are really, really, talented. It's our job to teach them and we have a lot to teach, but I love their humility, their eagerness to learn, their eagerness to be coached and just kind of how they are jumping in line and coming to work every day.”

Bresee is a 6-5, 295-pounder that runs like a linebacker, and Swinney said Bresee will one day play multiple positions, including end.

“Eventually, when he learns how to play and learns the system (playing end). Until you really know what you're doing, it's hard to be the best version of yourself,” Swinney said. “Right now he is still learning. But in due time, at some point, he is definitely a guy I will throw a pass to, hand it to, play special teams, play 3-technique or play nose and we could probably get by with him playing some end if we had to. So, I think as he goes through his career and really grows, there is a lot that you can do with him.”