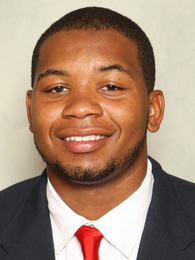 Defensive End
B I O
Has served as a reserve defensive end in his first three active seasons ... has 21 tackles, three tackles for loss and four quarterback pressures in 219 snaps over 24 games in his career.

Before Clemson: Spent the 2011 season at Hargrave Military Academy ... had an outstanding career in two sports at Riverside High School ... No. 14 player in South Carolina by Rivals.com ... No. 27 player in South Carolina by SuperPrep ... played in the South Carolina North-South High School All-Star game; had five tackles, two sacks, a caused fumble and recovered fumble ... all-region and all-county selection ... had 78 tackles, 22 tackles for loss, nine sacks, three caused fumbles, one recovered fumble and four pass breakups as a senior ... outstanding track athlete; joined that team in the spring of 2010 ... county champion in the shotput, runner-up in the discus and named Greenville County Field Athlete-of-the-Year ... region champion in the shot and discus and was a state qualifier in the shotput ... Riverside High School Field Athlete-of-the-Year and was voted as a team captain as a senior ... set school records in the shot (49’ 1”) and discus (128’ 6.5”) ... county shotput champion ... region shotput and discus champion ... named county field athlete-of-the-year ... coached by Steve Eoute in football and Eric Cummings in track at Riverside High School ... recruited by Jeff Scott and Dan Brooks.