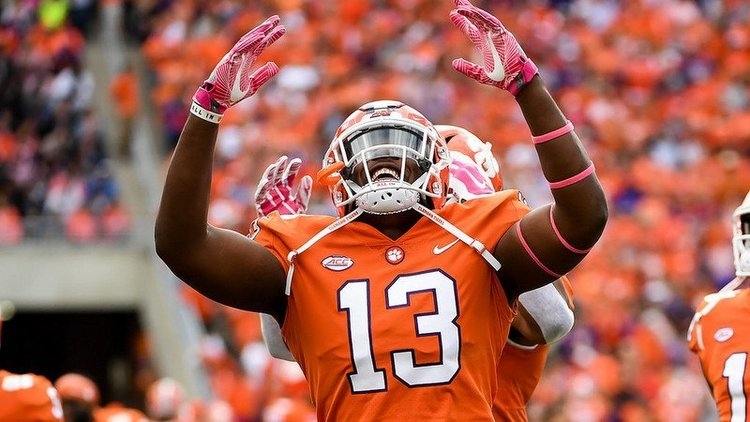 K.J. Henry looks to take over a starting role with another class of 2018 talent in Xavier Thomas.

Which Tigers step in as leaders on the D-line?: We spent much of December and January talking to Clemson’s younger players and redshirts, and to a man, they all talked about the invaluable leadership showed by Clelin Ferrell and Christian Wilkins.

Those three players are gone now, however, and leave a leadership void in the front seven. Who will step into those roles? We will find out more as the spring progresses – sometimes guys have to grow into a role, and the ones you think will be leaders prefer to stay in the background.

One defensive tackle that I like in that role is Nyles Pinckney. Pinckney has been overshadowed by the big personality of Wilkins, the sheer athletic ability of Dexter Lawrence, and the experience of Albert Huggins. But Pinckney is one of the hardest working players on the team – he’s always mentioned by the others in interviews – and will lead by example of nothing else.

Justin Foster is another player that I think will surprise people, both on the field and off. He’s managed to bide his time, and he’s learned his lessons in the move from linebacker to defensive end. A lot of people assume that freshman KJ Henry will start at one of the defensive end spots, but Foster has that rare blend of speed and power that make him a matchup nightmare.

Speaking of Henry, Wilkins likes the kid’s chances to be one of those leaders.

“I don't know, but whoever it is I hope they take it and run with it,” Wilkins said of the next wave of leaders. “There are multiple guys that could do it. KJ has that kind of outgoing personality, for sure, but I don't know who it will be because all of those guys have great leadership qualities and thing they bring to the table.”

Another one to watch? Xavier Thomas, who will be the Tigers’ most high-profile player on the line next fall.

“Obviously, he has some natural, freakish ability to do things that most people can't do,” Wilkins said. “That has obviously been fun to watch. And he loves to compete. On game day he is 100 miles per hour, full speed ahead, no quit and no stop. So that has been fun to watch.” - David Hood

Who emerges opposite Thomas?: The sheer amount of production from Clemson’s starting defensive ends over the last couple seasons is pretty staggering, but the Tigers are in a good spot with Thomas (10.5 TFL/3.5 sacks in 304 snaps last season) and couple worthy candidates opposite him as well.

The rising junior Foster impressed in spot duty behind Ferrell on the depth chart over 180 snaps, logging six tackles for loss and two sacks - including four stops, 1.5 for loss, with a sack versus Notre Dame in the Cotton Bowl.

Oh, and there’s also another 5-star-rated talent waiting in the wings with Henry, who was rated as high as the No. 6 player overall and took a redshirt to prepare for a moment like this.

Henry told TigerNet that he relished the redshirt in adding size and strength, while gaining valuable experience. Henry made an impact when he did see the field, logging a tackle every 4.3 snaps - capping his redshirt campaign with five tackles (two for loss) in 16 snaps at Wake Forest.

The spring will provide a nice proving ground for the young talents versus more experienced products such as Foster, also including a slew of incoming enrollees that could land inside or outside in the long run with Logan Cash, Etinosa Reuben and Ruke Orhorhoro. - Brandon Rink

What’s the outlook at defensive tackle?: Wilkins and Lawrence left huge shoes to fill – both literally and figuratively – and Pinckney and Williams will have the first chance at filling them.

Unfortunately, for both of those guys and the Clemson coaching staff, they will both miss spring practice with injuries. Pinckney had surgery to repair a slightly torn pec (pectoral muscle) and Williams suffered a leg injury playing intramural basketball that required surgery.

There is good news, however. The coaching staff knows what to expect out of Pinckney and Williams and it will give the younger guys like Darnell Jefferies, Xavier Kelly and freshman Tyler Davis plenty of reps.

Pinckney redshirted in 2016 but has played 490 snaps over 29 games over the last two season. He’s been credit with 44 total tackles, 6.5 tackles for loss, one sack, one forced fumble and one fumble recovery.

At 6-1 and 300 pounds, Pinckney certainly has the size to hold his own in the middle of the defensive line.

When Williams was being recruited, many saw him as a defensive end and he was the No. 4 outside linebacker in the nation according to Rivals, but he hit a growth spurt his senior year and when he arrived at Clemson in 2017, the coaches had no choice but to move him to defensive tackle.

The rising redshirt sophomore battled a knee injury during much of the 2018 season but still managed to play 147 snaps over 12 games. He recorded 13 tackles, three tackles for loss, 1.5 sacks and a forced fumble last season.

At 6-4, 310 pounds, a healthy Williams can be a powerful force inside, especially with guys like Thomas and Foster on the outside. - Nikki Hood