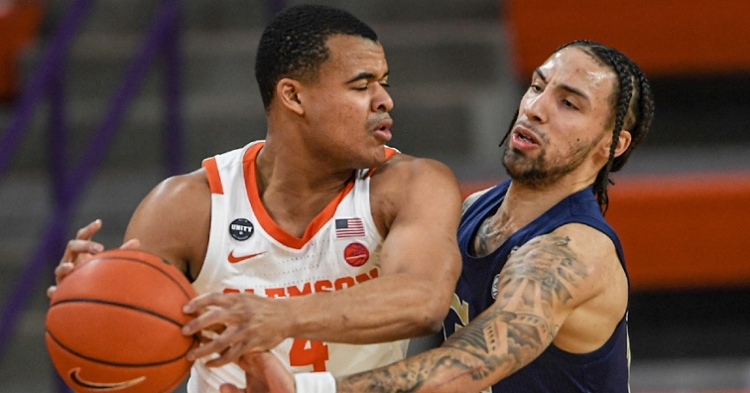 Honor looks for room in the first half. (Photo courtesy ACC)

CLEMSON – Nick Honor took it to the bank.

Honor’s 3-point shot from 25 feet banked in off the glass with a little over one second remaining, giving Clemson a thrilling 74-72 victory over Georgia Tech in Littlejohn Coliseum Friday night.

Clemson was out of timeouts and couldn’t stop the clock, so Honor followed a hard screen by Aamir Simms (on Alvarado) and banked in his game-winning shot. Simms tied his career-high with 25 points, while Honor scored 12. Clyde Trapp pulled down eight rebounds for the Tigers, who out-rebounded the Jackets 31-24.

Clemson improves to 13-5 overall and 7-5 in the ACC while Georgia Tech falls to 9-8 overall and 5-6 in the league. Clemson has now won four out of five and three in a row.

Clemson has won five-of-the-last-eight in the series dating back to the 2016-17 season.

The Tigers were competitive in the first half despite going almost seven minutes without a basket at the end of the half. The teams traded baskets for much of the first eight minutes but the Jackets went on a 16-9 run over the next seven minutes and led 28-19 heading into the final five minutes of the opening stanza.

Alex Hemenway stopped the Jacket run with two free throws that made it 28-21, but Michael Devoe hit two free throws for Tech and the Jackets led 30-21 with 2:04 remaining. The Tigers were able to hit five free throws over the remaining two minutes and Tech led 30-26 at intermission. However, Honor’s made basket at the 6:58 mark was the last field goal for the Tigers in the half.

The Yellow Jackets scored the first points of the second half to go ahead 32-26, but Simms broke the Tigers’ scoring drought from the field just 38 seconds into the half to pull Clemson back to within four at 32-28. Tech then led 37-33 when Clyde Trapp hit a 3-pointer that made it 37-36, and then Tech head coach Josh Pastner drew a technical foul when he smashed his faceguard after a backcourt call against his team. Hunter Tyson hit both technical free throws and the Tigers were in front at 38-37.

The next 13 minutes were a back-and-forth affair, with the teams trading baskets and neither team gaining more than a 3-point advantage. Trailing 68-67 with just over a minute to play, the Tigers had a chance to take the lead but Honor had a shot blocked out of bounds by Moses Wright. On the inbounds, Simms tried a short jumper from the key and that shot was blocked by Wright.

Jose Alvarado then got loose under the basket, and his layup gave the Jackets a 70-67 lead with 37 seconds to play. The Tigers called a timeout and then got the ball in to Simms, who hit a short floater in the lane for his 25th point, tying a career-high. With 30 seconds left to play, the Jackets led 70-69.

The Jackets were able to run 10 seconds off the clock before Trapp fouled Devoe, who hit both free throws for a 72-69 lead at the 18 second mark. The Tigers came out of a timeout and Jonathan Baehre hit a dunk that made it 72-71 with just 11 seconds left to play, setting up the final drama.

Clemson returns to action next Wednesday, traveling to Notre Dame to take on the Irish at 7 p.m. at the Joyce Center (RSN). The Tigers then travel to Pitt to take on the Panthers next Sunday (Feb. 21) at 6 p.m.

"That was a heck of a game. Georgia Tech is hard for us to guard. Their guards are excellent with their ability to drive. We made a bunch of shots in the second half tonight and played with great confidence down the stretch. We made a lot of big plays to keep us in the game."

"We set a nice ball screen at midcourt and got Nick loose, and he banked one in. That was a great fight and a terrific win."

"Aamir was fantastic. Being able to play through him really helped us and settled us the longer the game went on."

"We did some nice things in terms of being aggressive. Finishing the first half the way we did gave us some energy at halftime. I thought we would play better offensively in the second half, and we did. It was a game of scoring in the second half. That doesn't always work to our advantage, but, today, it did."

Honor is fourth Clemson player to make a game winning 3 point shot inside last 5 seconds but first to do it at home.

Travis Etienne had to rap in a pre-NFL draft interview