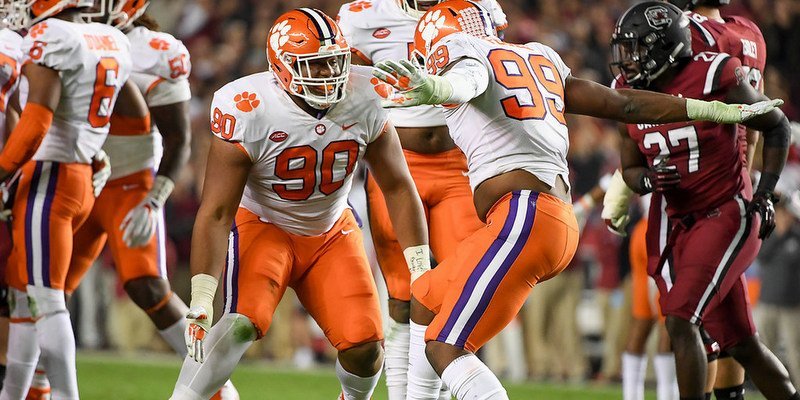 CLEMSON – The rivalry between Clemson and South Carolina is best known for the football game played each November, but there are times when the hate spills over into other sports. Even youth league sports.

Clemson and South Carolina are set to face off for the 116th time on the gridiron when the teams collide at 7 pm Saturday in a game that will be nationally televised on ESPN. Clemson opened as a huge favorite over the Gamecocks and the Tigers have won the last two games by a combined score of 90-17.

Should Clemson win on Saturday and make it five wins in a row, it would be the first time the Tigers have reached such a streak against the Gamecocks since 1940, which capped seven straight wins for the team. However, the Gamecocks had a five-game winning streak of their own before Clemson’s current streak, and emotions are high.

“It’s a different feeling, it's not every week when you are running in the locker room and people are spitting on you and throwing stuff at you,” Smith said. Monday. “Maybe some hatred in their blood down there. The feelings are mutual.”

Smith said that during his freshman season Clemson head coach Dabo Swinney showed a highlight tape of the rivalry.

“When I got here, my redshirt year Coach Swinney showed us a highlight tape of the rivalry. It was a video of the games and stuff, it showed us some history for guys like myself who don’t know much about it,” he said. “You could just see the emotion in the game itself. It really just felt like a different week my first week here practicing for it. It’s a big game.”

Clemson defensive coordinator Brent Venables said he has seen both parents and their kids act disrespectfully towards Swinney at youth league games.

“I just hear people being disrespectful to Coach Swinney when you go to little league games and stuff,” Venables said. “If my child was ever disrespectful to anyone like that we’d have some serious problems but I think it’s like allowed in this rivalry. That’s an example I guess.

“And the kids. They have no filters, say whatever they want to say. Most of it is just “Roll Tide” though.”

Venables said the rivalry compares to others he has been a part of, including Texas-Oklahoma.

“There’s definitely some similarities, there’s a lot of hatred in all of them,” he said. “This rivalry means so much to so many people, it’s pretty vile and that makes it fun.”

He then said that the team that keeps its poise will have the best chance of winning.

“This game is a season of its own and we have a very systematic way of getting ready for this game and I’m sure they do as well,” Venables said. “Once you get to game day that’s when you really have to have the poise to win. I think there’s a little bit more emotion, I think you’d be naïve to say there’s not. Hopefully, our guys understand the poise that it takes to win.”