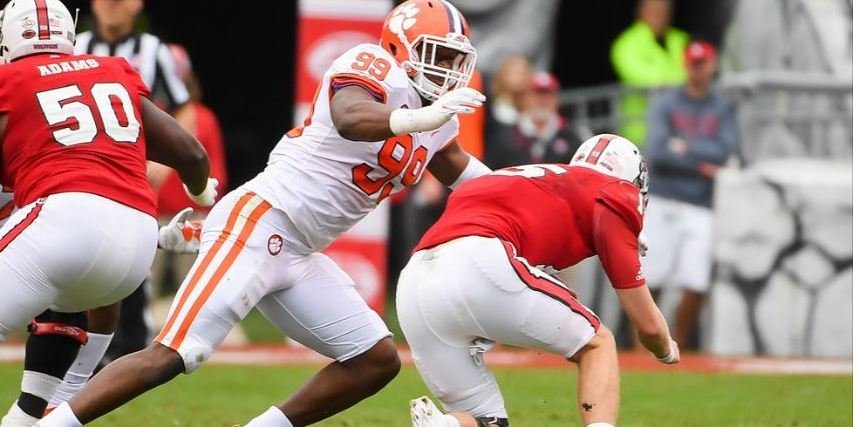 Clelin Ferrell matched his career-high in snaps in a 12-tackle and 5-TFL day at NC State.

Attrition on Clemson’s defense meant big snap counts for key starters and a shift in playing time in the back-seven against NC State.

Facing a similar wide-open offense in Syracuse two weeks prior, the Tiger defense had nine defensive backs take a snap – with seven playing 24 snaps and up and four on the field 57-plus plays.

For a second-straight week, Clemson rotated six linebackers in, coming off using only two for major snaps in the Syracuse loss (87 for Kendall Joseph; Dorian O’Daniel, 83). Tre Lamar topped 50 plays for the first time this season with a career-high 62, posting five tackles with one TFL.

* Freshman Travis Etienne led Clemson in running back snaps for the first time this season (35), ahead of Tavien Feaster (22) and C.J. Fuller (18) with Adam Choice staying on the bench. Despite the career-high play count, Etienne saw his third-most carries in a game (8) with Kelly Bryant attempting his second-most rushes of the season (20).

* McCloud’s 62 snaps combined on offense and defense don’t account for action on special teams as well. Playing in all three phases in a game is a rarity now, joining a club at Clemson most recently with Adam Humphries, who played his position at wide receiver as well as 11 snaps at cornerback and three punt returns in a 42-13 win over Wake Forest in 2012.

* Clemson’s rotation on the offensive line continued with eight linemen seeing at least 20 snaps for the third time in the last four games.

* After splitting reps with backups versus Georgia Tech, Clelin Ferrell (84) and Austin Bryant (82) each topped 80 snaps. Ferrell matched a career-high in snaps, with his most this season in a 12-stop and five-tackle for loss performance.

* Sophomore reserve defensive back K’Von Wallace stepped in with his second-most career plays (35) with a career-best five tackles, as well as two pass breakups and the game-sealing interception.