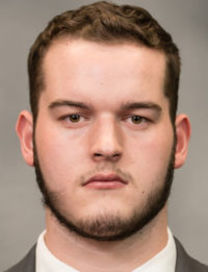 Offensive Line
B I O
Played his first season as a Tiger in 2017.

Before Clemson: One of the largest signees in Clemson history, he is rated among the top players in the state of New Jersey … top-10 prospect in the state by Max Preps (3rd), Rivals (9th), 247 Sports (10th) and ESPN (12th) … No. 10 prospect in the region by Scout … played at Peddie School his last two years … all-state selection who helped his team to a 6-2 record … named all-conference and all-area … team captain … played at McQuaid Jesuit High in New York prior to Peddie … played for Chris Malleo at Peddie School, a former player at Northwestern … wore #68 at Peddie School … chose Clemson over Alabama and North Carolina … recruited by Robbie Caldwell.