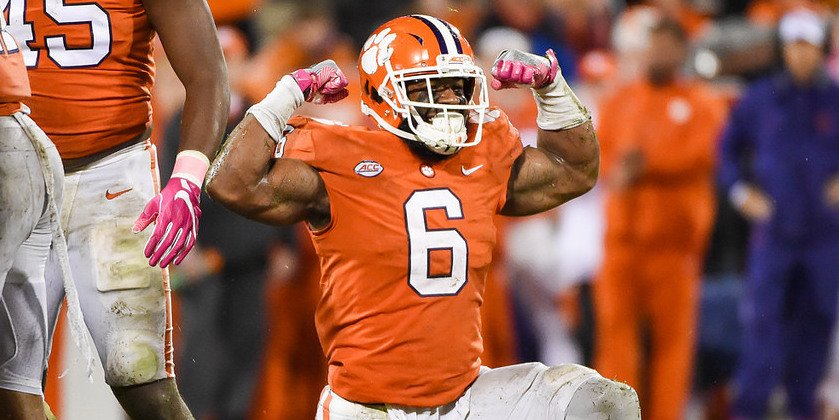 Dorian O'Daniel was credited with a team-high 11 tackles in 45 snaps against Georgia Tech.

There likely won’t be more of a 180-degree shift in offensive styles going from facing Syracuse to Georgia Tech, and that provided a different look to the defensive rotation after the bye week.

The biggest change came with sophomore Tre Lamar, who went from two snaps versus the Orange to 46 against the Yellow Jackets, lined up as a linebacker and a defensive end. Lamar was credited with nine tackles by Clemson, including two sacks.

His presence on the field kept sophomore defensive back K’Von Wallace on special teams-only, after averaging nearly 30 snaps a game prior.

The D-line saw a different look as well, with junior defensive end Chris Register equaling his most tackles (2) in his second-most snaps this season (28), while starter Clelin Ferrell tallied 25 snaps with six tackles.

With Dexter Lawrence sidelined for much of the game (ankle), redshirt freshman Nyles Pinckney stepped in with a career-high four stops in a career-best 28 snaps.

Taking a broader look at the playing time...

* Kelly Bryant’s 70 snaps was his longest time on the field since the Boston College game in September (80), balancing 33 pass plays for 207 yards with 12 carries for 67 yards. Hunter Johnson didn’t attempt a pass, but did total his most snaps (10) since the opener (20 vs. Kent State).

* Clemson also cleared the bench at tight end, working in five Tigers led by the TD-scoring Milan Richard (48), as well as junior Cannon Smith (28), who notched his fourth career catch for seven yards.

* Outside of center, there was a pretty good rotation on the O-line with eight Tigers playing at least 20 snaps. Redshirt sophomore Zach Giella made his season-debut with two plays.

* Kendall Joseph led a linebacker group in snaps (56) that mixed in six different Tigers for double-digit plays, including J.D. Davis notching five tackles in a fourth time in five games with 20-plus snaps (24). Dorian O'Daniel paced all Clemson defenders with 11 tackles (2 TFL) in 45 snaps.

* The only secondary sub occurred with Isaiah Simmons (31) splitting snaps with Tanner Muse (26), who was in-and-out after suffering a hand injury that required a cast. Simmons has been productive with his 23 snaps a game, tied for sixth in TFLs (3) and averaging a second-best 6.2 tackle-to-snap ratio (min. 20 snaps).