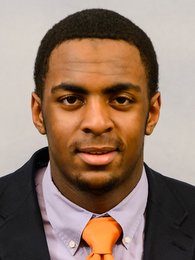 Tight End
B I O
Enrolled in January 2015 ... originally signed as a wide receiver, but made the switch to tight end prior to the 2016 season ... has a reception for eight yards and in 61 snaps over 12 games in his career.

2016: Made collegiate debut in 59-0 win over SC State ... logged four snaps in win over Syracuse ... logged three snaps in game against South Carolina.