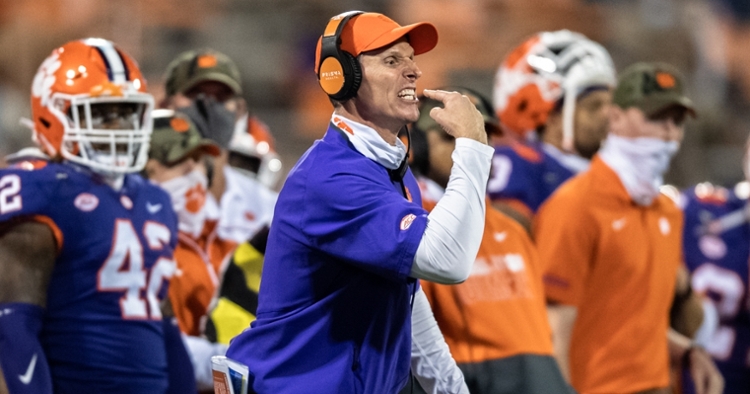 Brent Venables has said he is content to stay at Clemson.

There is a lot to talk about on this beautiful Monday, so let’s get started.

We will start with Clemson defensive coordinator Brent Venables, who has naturally emerged as a candidate to be the head coach at Oklahoma after Lincoln Riley and USC pulled off a sneaky deal this past weekend. Venables coached at Oklahoma from 1999-2011 and still has plenty of ties in Sooner country, so there was no question that his name would be mentioned.

What are the chances of Venables leaving Clemson?

Oklahoma would be stupid to not ask him to interview. He knows the area, knows the program, and he's one heck of a coach. I am sure they will look his way. But there are a bunch of other guys that will get a look, and most of those guys are going to have Power 5 head coaching experience.

I've also heard that Venables has told people around here that he wants to stay in Clemson while his two youngest are in school. He’s big on family, and now that he has been here a decade, this is home for the Venables. He's also had family move to this area while they've been here.

I think he loves it here, and I don’t think he loves the other stuff that comes with being a head coach. I think he loves the fact that he doesn't have to do the booster circuit and shake a lot of hands and meet with the media several times a week. I think he simply wants to go recruit and coach football. This is a man who looks content where he is. It doesn't mean he won't listen to OU - you have to listen. And maybe he likes what they have to say.

But as of right now, judging from what I’ve heard from the people that know him best, is that they don’t see it happening. And there is also the current environment of Oklahoma to consider – Riley has been recruiting the West Coast and the state of California hard for several months and he’s now expected to wreck much of the Sooners’ 2022 AND 2023 recruiting classes. No one knows if quarterback Caleb Williams will stick around after Riley broke promises to Williams and his family, and you can bet there will be transfers out of the program as a new staff moves in. The other quarterback, Spencer Rattler, is already out the door.

Whoever takes that job also has to navigate being a lame duck in the Big 12 while the Sooners and Texas prepare to head to the SEC. What do you tell recruits right now? There is a lot going on out there and none of it will be easy. Whoever walks into the job this time isn’t walking into the same job that Bob Stoops left for Lincoln Riley. As one industry insider put it, Texas and Oklahoma might become the very thing they don’t want to be – Nebraska.

That brings us to Tony Elliott, the Clemson offensive coordinator who has been listed as a target at Virginia Tech. The people up that way say that Iowa St. head coach Matt Campbell and Notre Dame defensive coordinator Marcus Freeman are the top two targets and both will be listed as candidates at OU before it’s all said and done.

It seems that Hokie AD Whit Badcock had a contract ready for Billy Napier to sign when Florida parted ways with Dan Mullen, and Napier (much as he did last year when he either turned down bigger jobs or took himself out of the running) waited patiently for the Gator offer.

I think Elliott is a top-three candidate up there, but right now I think he might be the third guy on their list.

Of course, once LSU and Oklahoma and Virginia Tech fill their openings, it will create a domino effect across the sport.

Strap in, the next weeks are going to be a wild ride.