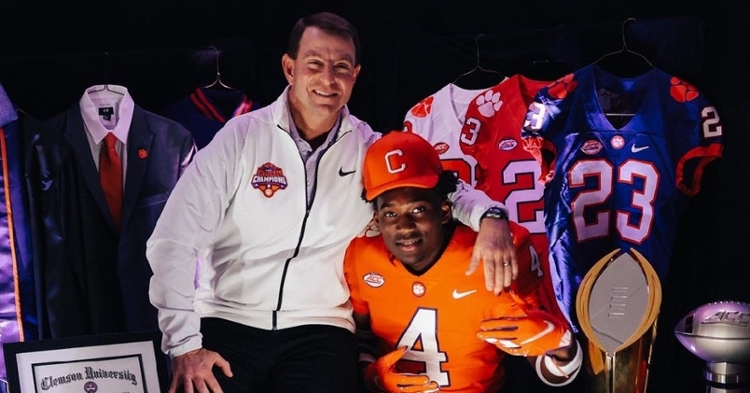 Braxton Myers says he is in constant contact with the Clemson coaches.

One of Clemson's top cornerback targets has a commitment date set but still plans on taking visits.

Cornerback Braxton Myers (6-1 185) of Coppell (TX) is a 4-star 2023 prospect who has Clemson in his final seven as he closes in on his commitment announced as May 16th. What’s interesting about his plans is he will take an official visit to Cal May 12th, and he has scheduled three others for June.

The Clemson visit is down for June 3rd followed the next two weekends by Ole Miss and Southern Cal. Myers said the Clemson coaches have not said anything to him regarding their policy that their commitments do not take other official visits. At this point, Myers said he plans to take all of his visits.

Myers narrowed his list to a final seven of Clemson, Cal, Southern Cal, Ole Miss, Auburn, Arkansas and LSU. He’s visited each unofficially with the exception of Cal which he will visit officially next week.

Myers said there were a couple of factors for him that were common with all seven schools.

“My relationship with the coaches with all seven of the schools, and they all want me for corner instead of safety,” Myers said. “They (Clemson) are recruiting me good. He (Mike Reed) just stopped by school today (Wednesday) actually. I’m also talking with Coach (Wes) Goodwin on a daily basis and just dialing it down.”

Myers said in evaluating Clemson, which he visited for a junior day in January, three points really stand out with him.

“How they produce DBs still and I can trust all the coaches up there,” Myers said. “They have a solid defense, and it fits the way I play.”

As for the deciding factors in choosing the right school, Myers pointed out three that are most important to him.

“Where I feel I can be the most successful,” Myers said. “The opportunity to play early, and if I can see myself there for three or four years.”

Last season Myers was in on 40 tackles with five tackles for loss, 11 pass deflections and three interceptions.