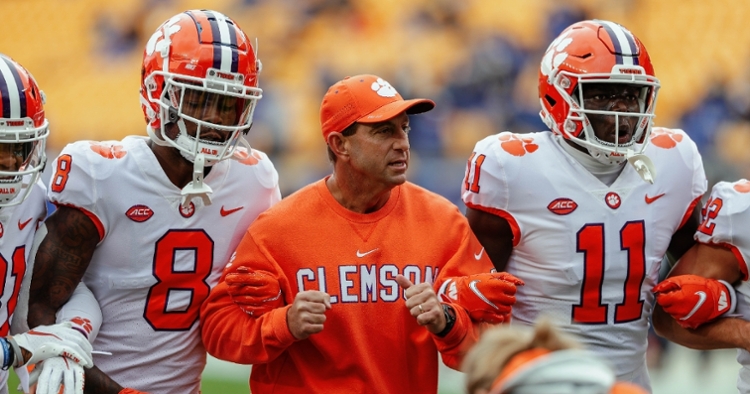 Swinney walks with his players during pregame.

PITTSBURGH – Clemson’s football program is in unfamiliar territory heading into the last of October, sporting a 4-3 overall record with a 3-2 mark in league play. Those two losses in the ACC mean the Tigers likely won’t repeat as ACC champions and a seventh consecutive trip to the College Football Playoff is out of the question, but head coach Dabo Swinney told the media Saturday that better days are ahead and that he isn’t considering any staff changes moving forward.

Clemson’s offense managed just 315 yards against the Panthers and sits at the bottom of the national rankings in several categories, leading many to wonder if Swinney is thinking about making changes to his offensive staff.

Swinney said no when asked that question after the game.

"Absolutely not. We have a great staff that I believe in wholeheartedly,” Swinney said. “We’ve all got to do a better job starting with me. It’s definitely a year that’s hard to explain. It’s just crazy what we have dealt with. Nobody wants to hear that, but I’m here every day. I’ve got a very good perspective and a front-row seat to the issues that we have. I know the type of people we have involved. No, man. I believe in our staff. I love our kids. And we’ll keep pushing through."

Swinney said despite the tough times, it’s important to keep the proper perspective.

"The kids are trying hard, we just aren't very good right now. We just have to keep grinding. I think we have to have good perspective,” Swinney said. “This is a really bad stretch we're in. Really bad. I do know that every storm runs out of water eventually. But in the long run, this will make us better. I know nobody wants to hear that. We've had a lot of winning around here. We're in a tough stretch right now but it will make us better. We'll look back on this in a few years and see the fruits of this moment that we are in."

Swinney was asked how he would respond to the segment of the fan base that wants some of his coaches fired, and he responded by saying that while people have a right to be disappointed, he will stay the course.

"If I start running this program by listening to people on the outside, I'll be done pretty quick. If I've done anything over 13 years as a head coach, we've been a model of consistency,” Swinney said. “Hopefully, we've earned a little bit of trust. Everyone has a right to be disappointed. I'm sick to my stomach. But I know what we're made of and what I'm made of, and we'll grow through it. We'll get back to winning some ball games and hopefully that will make us appreciate it even better. Will continue to get better, continue to recruit, and continue to get players back."

The Tigers did bench starting quarterback DJ Uiagalelei in the third quarter and Swinney that all jobs are open considering the dismal performance.

"I think everything is under evaluation at this point. Everybody has to show up every single day. We have to take it one day at a time,” he said. “We'll go to practice and see who has the best practice and see who runs out there first at every position. We've had a lot of good fortune around here and this is a tough time. This is a hurting staff, team, fan base. This is not the Clemson standard. But in the long run, this will make us better. I know that. It's up to me to fix it."