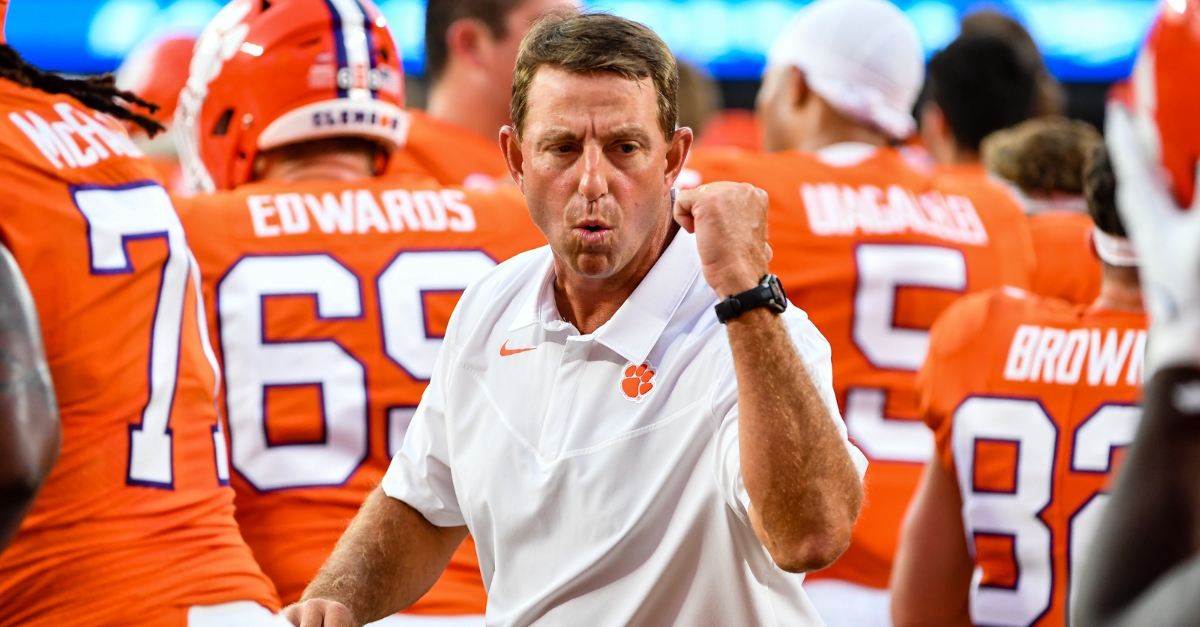 Swinney reacts during the loss to Georgia.

Clemson head coach Dabo Swinney didn’t hold back during his Sunday teleconference with the media, admitting that he wishes the Tigers would have stayed with the run game and that play calling needs to be better. In all, it led to what he called a C-minus effort.

"Congratulations to Georgia. Incredibly hard-fought game. They are a great team,” Swinney said. “We are a critical-error pick-6 away from a 3-3 overtime slugfest. Our defense and special teams more than played well enough to win. Offensively we really struggled, but we'll dust ourselves off, own it and get better. The only thing we can't do is go undefeated; that's the only thing we know about this team."

Swinney said he was disappointed in the play of the offense and gave that unit a letter grade.

"I don't want to take anything away from UGA's defense, but it's the things we do control that are disappointing,” he said. “We took too many sacks and a sack on a receiver and missed a signal. Obviously had a few sacks on the offensive line. The quarterback took some sacks. We had a great third-down call and drop sack. We had a critical drop on third down.

“We didn't manage the game well either— players or coaches. We got out of rhythm. We never finished the drives-- missed throw, mentality, drop, bad snap. You can't make those types of mistakes. I would say we played our C- game and you aren't going to win a game like that. DJ did not play well in the first couple of quarters: pocket presence, footwork, game awareness— things he's not done in practice. No greater teacher than in-the-fire experience. Justyn Ross had a couple of critical mistakes. But like I told him after the game, I was glad to watch him have a couple critical mistakes." 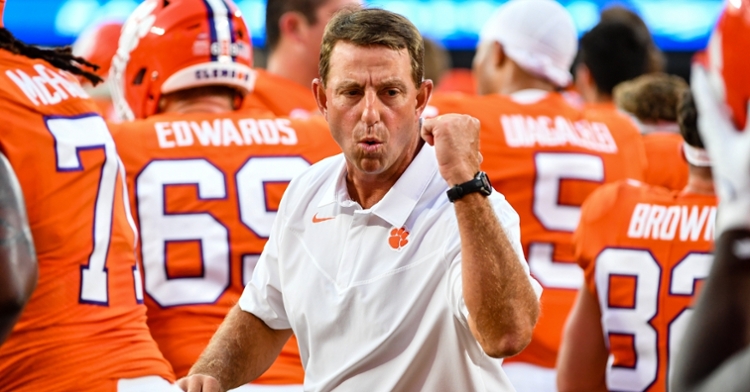 Swinney reacts during the loss to Georgia."

In regards to play calling and sticking with the run, Swinney said he wishes the coaching staff would have stayed with the run.

"Yeah, I think so for sure. We just always seemed to be behind the chains, bad field position,” Swinney said. “I don't know that many people will be efficient running the ball vs. UGA, but we were nowhere near effective. With DJ not being settled in, we didn't do a good job of sticking with the run in and hanging in there with (the run game). Definitely, something we didn't do well as coaches."

The coaching staff also didn’t utilize Uiagalelei as a runner.

"We got away from that. We had a big TFL on a counter and didn't block No. 99 (Georgia's Jordan Davis),” Swinney said. “We had a couple of nice runs, two nice counters and a draw. We didn't give him enough opportunity. That's something else we could have done a better job of. We just need him to be effective and take what's there. We gave them the option to throw or run a couple of times and he chooses to throw, and I don't disagree with him. It starts with us being in rhythm. We need good pocket presence, execute the system, good game awareness, and make plays with his legs when we need him to."

Swinney said the connection between Uiagalelei and his receivers wasn’t what it needed to be.

"It was a combination of things. And again, not what we've seen in practice,” he said. "Justyn (Ross) hadn't played in quite a while and we can only imagine where he was as far as that moment. He's been awesome in practice but he had some critical errors. We had some mis-throws, misreads, miscommunication."

Swinney said he is proud of the way Uiagalelei has responded.

"I told him I was pleased with that more than anything. He was the first one in (Sunday) watching tape. I told him I was really proud of he responded,” Swinney said. “That is what you want to see. Would have been very easy for him to get worse. But man, he stepped up and responded. I loved the look in his eye. He really, I thought, responded to the adversity. He put us in a position to go win the game. We didn't do enough down the stretch to get it done, but it was good to see that because he hasn't had much adversity. He had a bitter pill last night and I thought he handled it well."

He was, however, proud of the way the defense played, especially those that stepped into starting roles.

"Ruke (Orhorhoro) belonged. All our ends did a lot of good things,” he said. “Good to see XT (Xavier Thomas) playing at the speed he can play at. He made his presence felt. Jalyn Phillips got a lot of experience. Joseph Charleston did a heck of a job. Tré Williams had a couple of busts but he's a presence. He's got to grow down in and down out in his consistency. But he is a problem and a handful."

Swinney ended by saying the offense still has work to do and he believes they have the pieces in place to build from.

"Good, still work in progress. One game. New running backs, new quarterback. Love the tight end leadership, quarterback leadership, (Jordan) McFadden, Bockhorst, and (Walker) Parks,” Swinney said. “These receivers getting healthy. You have to understand Frank Ladson and Joseph Ngata didn't play last year, they really haven't played since freshman year, so yeah, they're a work in progress. But man, we played Georgia and we would do it again because it's going to help us get better.

"We are nowhere near the veteran group the defense is, that's for sure. We have plenty of experience and talent though and they are going to improve."