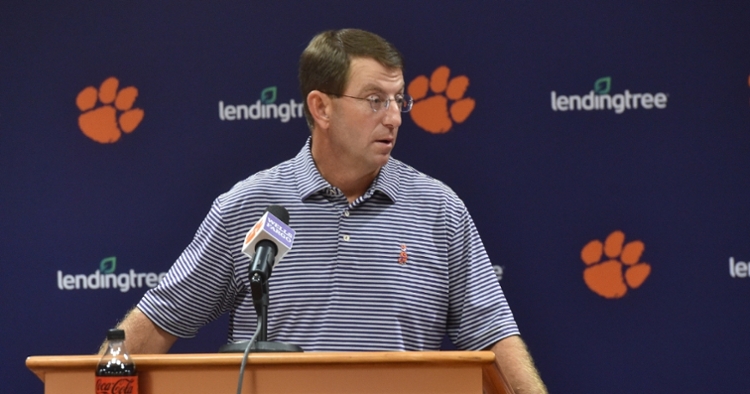 Swinney says he knows how to fix his program.

CLEMSON – Clemson head coach Dabo Swinney isn’t reaching out to anyone for advice.

As Clemson has struggled out to a 2-2 start (and 1-1 in the ACC), the hue and cry from the national media to fans to social media has reached a crescendo, and Swinney says he doesn’t need to reach out to a mentor – he is getting plenty of unsolicited advice from those who think they know better.

Clemson is set to take on Boston College at 7:30 pm Saturday in Death Valley on Homecoming. The game will be broadcast on the ACC Network.

Swinney was asked if he has reached to anyone for advice, and he smiled and said he didn’t need to.

Swinney said his team is going back to the fundamentals.

"Sometimes to make progress you have to go backward. You won't make progress if you're not more disciplined and don't do things with fundamentals. You have to be better at the basics,” Swinney said. “Fundamentals, technique, discipline, ball security, missed assignments - the basics. They jump out. They beat you. That's the difference. Nobody wants to hear it but the reality is we're two or three fewer mistakes from being 4-0. We wouldn't be much better as a team but y'all would be asking me different questions. We stunk it up last Saturday but still had a chance to win in double overtime. It's not that far from the penthouse to the outhouse."

Swinney said he thinks his team will respond and then spent a few minutes reminding everyone how his program has responded to adversity in the past.

"We have a great group. I love this team. This will be one of my favorite teams. This is a great group of young people,” Swinney said. “We just have to teach them and grow them up. We're young and inexperienced in some spots, we've lost some players to injuries and lots of challenges but everyone has those things. As far as the group of people? This is a great group. It's unusual around here because we haven't been in this situation for a long time. 2-2 at Clemson is a different experience. Sometimes you have to go backward to make progress.

"It's one of the best opportunities we have had as coaches to teach and to grow. I laugh at people who act like we haven't had any adversity around here.

“We were built through adversity. We've had so much success that it's unbelievable. You have to take the good with the bad. We have a great group of talented people who care. Everybody has moments, bad days, or bad games. It's how you respond. That's what winners do and we have a bunch on this team. It's disappointing when you don't achieve what you set out to achieve. But ... what are you going to do about it? We've always responded. That's why people storm the fields when we get beat ... because we've always responded.”

There are lessons to be learned in defeat.

“A lot of y'all have been on a lot of great bowl trips covering Clemson. 2010 we won six games and I'll never make it here and will never be successful. 2011 and we start out 8-0. They remember November,” Swinney said. “Unfortunately we didn't get a trophy at 8-0. We gave up 70 in the bowl game. 2012 we went 11-2. We got embarrassed by Florida State in 2013 and lost to South Carolina for a fifth straight time. So we've had some adversity around here. They stormed the field last year at Notre Dame during a pandemic because that's what you do when you beat Clemson.