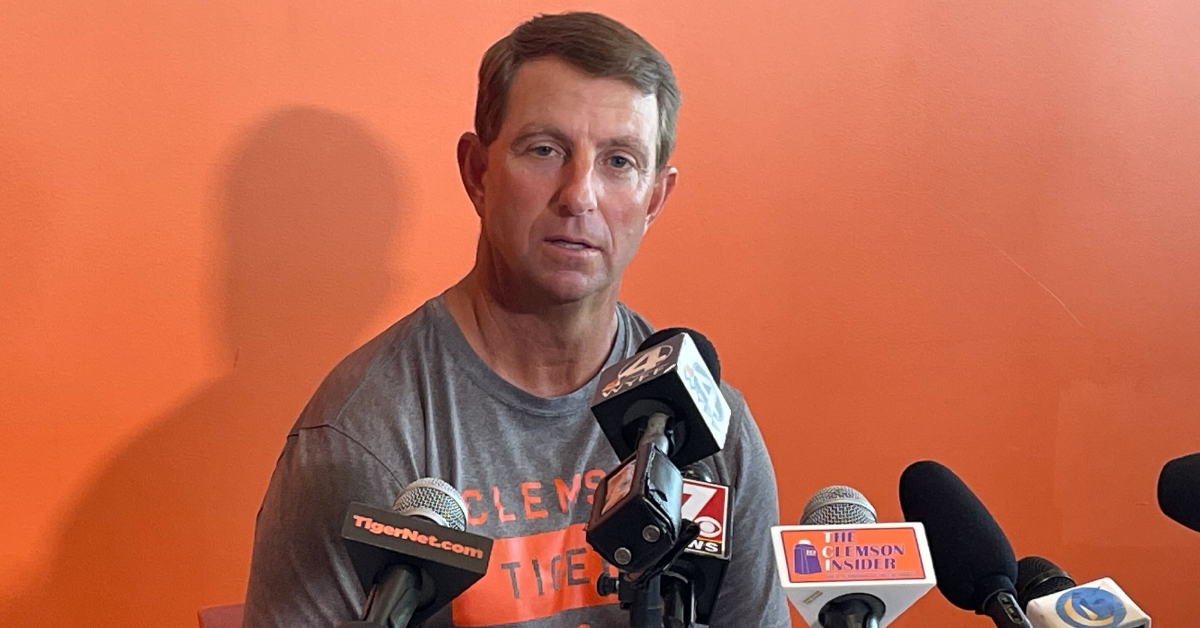 CLEMSON – Clemson held the first fall camp practice Friday afternoon, and head coach Dabo Swinney touched on a variety of topics, including what he's looking for in the practice, the health of his team, and the weights of the members of the offensive line.

Swinney met with the media before the start of the first practice, speaking for over half an hour in the PAW Bistro. The following are some of the highlights of Swinney's press conference:

*Day one as far as getting on the grass, as a staff been back at it for three weeks preparing and getting ready. The team has done a great job all summer long and it’s been a fun summer. The team has had five days with the staff and then the last few days have been all about football. Lots of buzz and great energy. Only 31 days until they play and a lot of work between now and then. Can’t win the opener until you get in camp. This team has the right approach and right mentality.

*This is his 33rd year in college and 14th as head coach and it never gets old and he loves it, loves this time of year. He thinks this team is way ahead and knows what it takes to win. They have all the measurables to be a good team. He likes where this group is.

*He touches on losing safety Lannden Zanders, says they have depth at safety. Only position he has questions for is punter.

*He says if Cade Klubnik is needed early in the season he will be ready. “That is why we put him No. 2 on day one. He is in a great spot.”

*He says Trenton Simpson (240 pounds) is the best version of himself that Swinney has seen. He then says that guys like Trent Howard and Ryan Linthicum are also in great shape and have transformed themselves. Swinney says Simpson is good news for the Tigers and “bad news for whoever we play.”

*Wide receiver Troy Stellato will be limited Friday and Saturday (hamstring) and Swinney hopes to have him back full speed Monday.

*Swinney calls Nate Wiggins “Nate the Great” and says Wiggins battled immaturity last year. He says Wiggins is maturing and buying in to what it takes to be great.

*Swinney says the goals haven’t changed, including win the opener. Said he was very disappointed that Clemson didn’t win the opener last season.

*Swinney says WR Will Taylor is “a baller” and is healthy and ready to go.

*He says he sees maturity, focus and health out of WR Joseph Ngata (and then knocks on the table). He said Ngata has had an outstanding spring and summer.

*He says he is pleased with offensive line and their weights, including Dietrick Pennington (360 pounds). He said Pennington is lean. “It’s all about the composition. Some of you wouldn’t be very good at 360, but he’s lean. And this entire group – this is probably as big and as strong as we’ve been across the board. We have to figure out who is running out there first.”

*He said OL John Williams has also persevered and is ready to go, a very versatile player.

*He said he has communicated with Deshaun Watson quite a bit in the last year or so.

*Swinney wants to see good practice habits and maturity out of his players today.

*He says that Ella Bresee, younger sister of Bryan Bresee and is battling cancer, is an inspiration to the entire locker room. “She is in a tough battle. Her spirit and her joy in the moment are inspiring. She is someone I pray for every day.”

*Swinney says WR Antonio Williams is a very polished player, and very technical. Swinney said he can't wait to see Williams in practice and work with him.