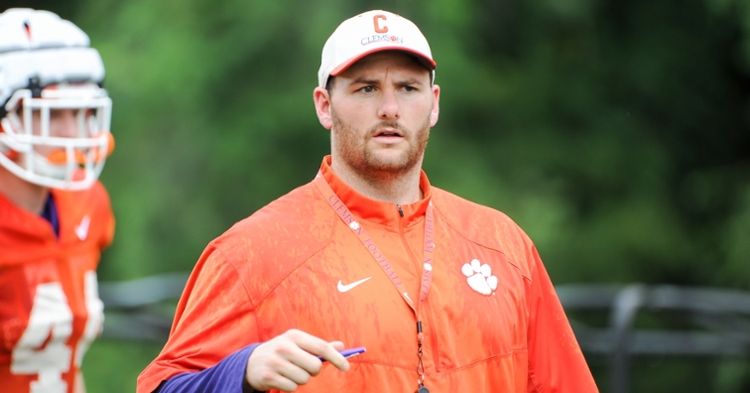 Thomas Austin is back to help Robbie Caldwell with the OL.

Clemson head coach Dabo Swinney spent the first 18 minutes of his pre-spring press conference Wednesday detailing the changes to his staff, and there are plenty of changes to talk about.

Clemson began 2021 spring practice Wednesday afternoon, but Swinney met with the media prior to the start of that practice to preview the spring. Much of that question-and-answer session centered on the changes made to his staff since the season ended in the Sugar Bowl loss to Ohio State.

"Our staff, we have had a few changes there. Only one on-the-field change with our ten assistants, but we have had the most support staff turnover that we've had in quite a while,” Swinney said. “I am excited for those guys that have been able to move on into some great opportunities but also excited about having the opportunity to go to my depth chart and give some guys some opportunities.”

Swinney says Spiller will be a big addition to the staff and that Pearman will thrive in his new role.

"There is no better ambassador for Clemson University than CJ Spiller," Swinney said. “Danny has a great mind for the game and he’s worked on both sides of the ball. He has a great perspective. He and Zach Fulmer are going to head that up. I know there is a lot of rhetoric out there that they will sit there and watch the portal every day. That is a small part of the Director of Scouting role. This is high school scouting, college scouting, and also about opponent scouting and self-scouting. This will be a great transition for Danny and set us up for what we need heading into the next decade.”

*Bill Spiers will step into a new position, the Director of Special Teams. He will handle the special teams from an off-the-field standpoint, and Mickey Conn, in addition to coaching safeties, will be the on-the-field special teams coordinator and handle practices.

*The Tigers lost every member of the offensive support staff except for JP Losman.

*Ted Roof is joining the staff as a defensive analyst. Swinney said Roof is living in the area on the lake and has a son that is trying to come to Clemson.

*Andrew Zow (former Bama QB) is joining the staff as an offensive analyst. Swinney said he has had his eye on him for a long time.

*The team has added Kaleb Nobles (former OC at West Florida) as an offensive development coach.

*Former quarterback Cole Stoudt is back to work with the quarterbacks as a development coach. “It’s a great time to bring Cole back.”

*Former OL Thomas Austin (who has been the OL coach at Georgia St. the last four years) will work with OL coach Robbie Caldwell. Swinney said he is really excited to have Austin back. Did a great job with Shawn Elliott at Georgia St. and he thinks Thomas will be a great help to Caldwell.

*Former OL Tyrone Crowder (was at Daniel) will take the place of Maverick Morris as an O-line graduate assistant.

*Former WR Artavis Scott is back as an on-the-field offensive GA. He will start Friday. Swinney said Scott wants to coach and says he will be a great addition.

*Andrew Shipman will be the offensive video GA.

*Former S Elijah Turner is taking Xavier Brewer's spot on the defensive side and will help the safety spot.

*Carter Thomason will be a defensive video GA.