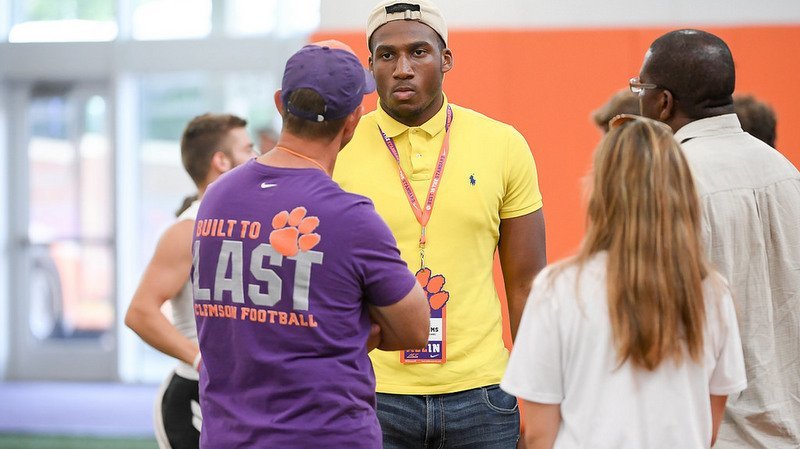 When Greg Williams arrived at camp two weeks ago, his goal was to catch defensive coordinator and linebackers coach Brent Venables’ attention and earn an offer from Clemson.

The 2019 3-star Swansea (SC) outside linebacker participated in the first session of Dabo Swinney’s high school camp, left with an offer and returned to campus a week later with his family in tow.

Williams currently owns 18 offers, with Clemson and Missouri being his only Power 5 offers, so claiming an offer from the Tigers was a big deal for the Palmetto State native.

“I felt blessed to receive an offer from a top-10 school,” Williams told TigerNet recently. “I had the mindset that if I put my all into my drills and focus that it's possible I would get offered. He (Venables) told me after my workouts at the end that he wanted to offer me. He said he would need to talk with the staff first and he called me and offer me.”

The second trip to Clemson was to become more familiar with the campus as well as the football facilities and staff.

“I made the second trip to get to see the campus and get to know more about the school,” Williams said. "They took me on a tour. I got to see the athletic dorms and talk to the academic staff. I feel that the campus has many opportunities for education and I feel more knowledgeable about it than I did before.”

Williams and his family also had a sit-down meeting with Swinney about what it means to commit and to be ‘All In.’

"They just want to make sure when I say I'm all in, I'm all in," he said. "They really want to work with me. He (Swinney) said he wants to mold me into a great player because he believes I'm a great fit at Clemson."

However, Williams has a long way to go in his recruitment and isn’t quite ready to pull the trigger on a commitment.

“I want to work on building a relationship, with Coach Venables. I just want to enjoy my recruiting process, but they are (Clemson) in my top. However, I don't have a specific order yet,” he said.

As a sophomore, Williams garnered All-Region honors and during his junior campaign he totaled 103 tackles, making him one of the top tacklers in the Midlands.