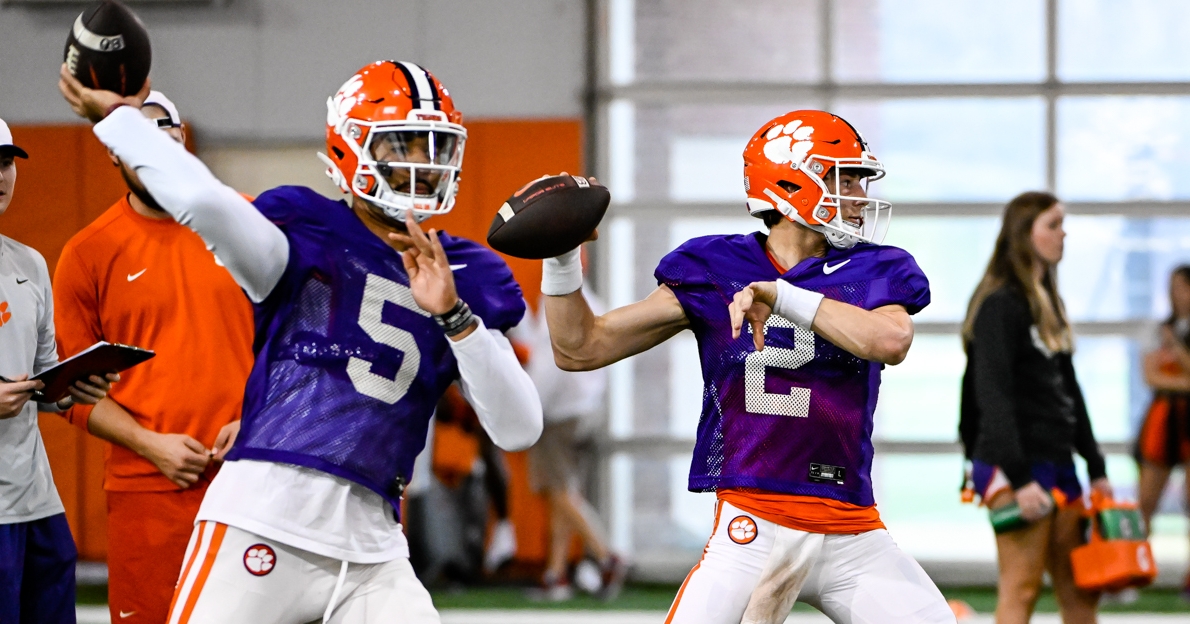 Former ACC and NFL quarterback Mike Glennon saw a big jump for DJ Uiagalelei from week one to week two but said Clemson's star freshman – Cade Klubnik, will be knocking at the door for the rest of the season.

Uiagalelei looked as comfortable in the pocket last weekend against Furman as he has since his freshman season, completing 21-of-27 passes for 231 yards and a touchdown.

Glennon – who played for NC State from 2008 until 2012 and spent nine years in the NFL with the Tampa Bay Buccaneers, Chicago Bears, Arizona Cardinals, Oakland Raiders, Jacksonville Jaguars, and New York Giants – told TigerNet earlier this week that for the first time he saw a calm and comfortable Uiagalelei.

"Going back to the tape last year, it looked like he was overwhelmed. I remember the feeling as a player: you get to the college level, and the speed of the game is a lot," Glennon said of Clemson's junior signal caller. "I thought there was a bigger transition from high school to college than there was from college to the pros as far as adjusting to the speed of the game. I saw a guy that just looked confused. He didn't really know what he was looking at and he kind of struggled getting through his reads.

"You go to the Georgia Tech game, and it seemed kind of like last year. Then I turn on this tape - and I get that they're playing a much smaller school that doesn't have the speed - but it just felt like the game looked slower to him. It looked like he was calm in the pocket. It looked like he was processing information and just letting his eyes and his feet do the talking. Those have to be in unison. He looked as comfortable as I've seen him. He was calm in the pocket. He was getting through his reads. It was the first time I've seen him get through a read - starting on one side and getting back to the other side. There was tremendous growth."

Glennon said that the most difficult part of playing quarterback is learning to trust your eyes because the game is moving so fast, and he saw Uiagalelei go through his progression – look off a receiver a come back – against Furman, which is a sign that he is starting what he sees.

"The No. 1 thing is that you have to trust your eyes. If your eyes that a guy is open, then you've got to let it rip, but if your eyes are telling you that you can't make that throw, then you have to find the No. 2 receiver, then you have to get to No. 3," Glennon said. "It's got to happen fast. You don't have time to just sit back there. These things happen fast. It's a difficult decision to play and to be able to process information that quickly and to make those decisions. Is that guy open? No? Then move on. All that stuff happens extremely fast, and it can be overwhelming. I think last year he saw some of that, and this year maybe he's getting to the point where he can trust his eyes better and get through those progressions.

"It's still early in the season, and I want to see him do it against a faster opponent where everything is faster. With that said, I think it was a huge jump from week one to week two."

While Uiagalelei is continuing to grow and progress, Klubnik showed flashes of greatness against Georgia Tech to begin the season.

"I was really impressed with Cade Klubnik in the first game, and I thought if they really want to get to where Clemson wants to go, they might have to consider this," Glennon said of Klubnik. "This past week, it kind of slipped. I thought DJ looked really good, and I thought Cade kind of struggled. He had like the deer in the headlights, and he was the guy who was a little overwhelmed. I don't know. This is going to be a tough decision for Dabo Swinney. This will continue to be the talk of the ACC until DJ really grabs, or Cade shows he's ready to take over."

It wasn't just Klubnik's command of the offense; it was also the energy he brought to Clemson's offense against the Yellow Jackets.

"It was the spark he brought," he said. "He got on the edge and made a couple of throws, but the one that got him on the goal line where he faked the bubble screen and hit the other guy, it was really well-placed ball. It was a little risky, but it worked. He showed his arm talent and athleticism. He showed that he belonged. There was an energy and spark to that offense. It was the end of the game; I get it. The offense just felt different, and it moved so much easier. It didn't feel hard. I felt like in the Georgia Tech game -- they were straining for every yard, every big play."

Glennon said he expects the quarterback battle to continue a little longer but thinks it should be settled before Clemson travels to Winston-Salem a week from Saturday.

"It was the exact opposite in the Furman game. With DJ, it was seamless. He played really well," Glennon said. "When Cade got in, it looked hard again. The offense wasn't really moving. They are making this as hard as possible for Dabo to make a decision. Cade just looked like a freshman out there and having some growing pains trying to figure it out. That's part of the process. With that being said, I'm sure they want to get this thing squared away before they start ACC play against Wake Forest and NC State."

Signs the game may be beginning to slow down for DJ U. Most calm and relaxed with his feet and eyes he has been.@ClemsonInsider@ClemsonTigerNet@Clemson247@TIinClemson@STSouthland pic.twitter.com/ZdidHwXx47