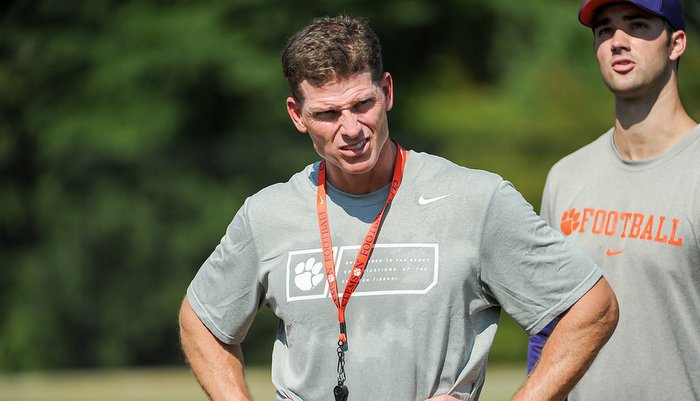 Venables wasn't pleased with the defense's performance during Thursday's scrimmage

The Tigers scrimmaged one final time Thursday afternoon as fall camp comes to a close, and it was evident that Clemson’s defensive coordinator was irritated with his unit’s performance, as well as his coaching.

Venables told the media following the scrimmage there were bright spots within the first team unit, but he isn’t comfortable with where his unit his 15 days from kickoff.

“I would probably agree with that – there are more guys ready to play in the first unit comparatively speaking. I don't feel good about where we're at necessarily,” Venables said. “I feel good about certain guys. We've got to get better. When the guys go out on the field, and you're not doing your job, they'll find you. That's what I look at. I look at a situation where we're supposed to be playing a certain coverage or a certain leverage, and we're running a route on air and we lose leverage on air against a guy walking a route. It was dumb things like that. That's bad football.

“You give up a touchdown because we don't communicate a little switch route. It's fundamental. We see it every day - three, four, five times a day. We talked about it in the meeting today and then we do it. It's just dumb football. We aren't that good. We can't afford to give people cheap, easy ones, and we did that. It was fourth-and-one in overtime we let the guy spit out for 30 yards. We've got ten guys in the box. We're not very physical at the point of attack when we need to be.”

Venables said that the simple mistakes made by the defense were dumb football and a result of dumb coaching, something that can’t happen on gameday.

“I thought there were five or six plays overall today that we just played dumb football,” Venables said. “Just dumb football with the guys that ran out on the field. I don't look at ones and twos. I just look at good football or bad football, and there were five dumb plays. We just played dumb football, and that's a reflection of dumb coaching. I was a dummy today five plays. I'm not happy with that, and that's not acceptable. It's easy fundamental things, and it wasn't good on five plays, and I'm really disappointed two weeks outside of playing in a game.”

“I couldn't even tell you. Honestly, I have no idea [who is in the rotation],” he said. “I've only got a couple of guys, and you know who they are, so just list them out. We've got two [that could play]. Whoever else there is, put them together because they're not ready to play winning football yet.”

“It's like drafting somebody at quarterback. Try that. I'm good, but I'm not that good,” he said. “I coach the 'backers. Aiken isn't the answer today. He's just another body.”

"Five inside - four for sure inside. D.J. Reader

Albert Huggins
Fr. Defensive Line
#67 6-3, 280
Orangeburg, SC
View Full Profile may be in there. And, then maybe three at defensive end. "

"He's spotty right now. We've got work to do. He knows it and he's played there."

"We've got a solid two-deep there. You've got Mackensie Alexander

Mark Fields
Fr. Cornerback
#24 5-10, 185
Cornelius, NC
View Full Profile might. If you had to say that they had to play for the ones today, Edmond would probably be a little ahead of Fields, but he's missed a lot. He's been banged up. We'd like to play him [Fields], but he's got to show us that he's ready to play."

“It was good. He'll be back next week and he'll be ready for the first game unless there's a setback. The plan is for him to be ready.”