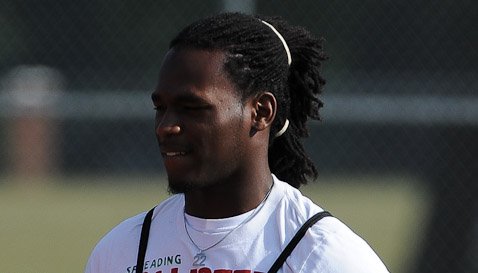 In 2012, the Clemson Tigers struggled in the return game, but head coach Dabo Swinney

Dabo Swinney
Head Coach
View Full Profile thinks he may have found the answer to the Tigers’ problem.

Tyshon Dye
Running Back
6-1, 210
Elberton, GA
View Full Profile out of Elberton (GA) Elbert sat down with Swinney during his official visit this past weekend and Swinney’s message was to be ready.

Tony Elliott
Assistant Coach / Running Backs
View Full Profile told him that he will have the opportunity to contribute at running back and on special teams as a freshman.

As senior, Dye rushed 95 times for 817 yards and 12 touchdowns. He caught four passes for 63 yards. He was one-for-two for 27 yards throwing the ball and returned eight kickoffs for 120 yards and a touchdown before suffering an ankle injury sidelining him for his final two games.

Dye said that he feels no pain and that his ankle is almost back to full strength.

“I don’t even notice it now. I think it is about 98 percent,” Dye said. “I am running and lifting weights and doing things on my own, and I can put all my weight on it again and not feel any pain. It feels great. I plan on running track in the spring.”

Dye arrived Friday night for his official visit and he said that he enjoyed hanging out with other players and prospects at Swinney’s lake house.

“I had a great time this past weekend,” Dye said. “I got to the campus on Friday and we had a meal and got to talk to the coaches, and then we all went for a trip out to Coach Swinney’s house on the lake. We were just chilling and hanging out and talking. It was fun.”

The highlight for many of the prospects that were in town was hearing form Clemson great Brian Dawkins speak at the football banquet, and Dye was no different.

“We went to the basketball game and then we went to Clemson’s banquet, and I thought the banquet was what I enjoyed the most,” he said. “Brian Dawkins got up and he gave us a great speech and told us to keep working hard and that we can do whatever we want.”

Dye’s player host was freshman running back Zac Brooks and Dye said that he enjoyed getting to know Brooks.

“That was the first time I had gotten to talk to Zac,” he said. “We had a good time together. He is a pretty cool guy.”

Montravius Adams
Defensive Tackle
6-3, 281
Vienna, GA
View Full Profile and he said that he feels like the Tigers have a great chance at landing both.

“I talked to those guys,” Dye said. “We really didn’t talk about where they were going or anything like that. We just talked about normal things. I think Clemson has a great shot with all those guys.”

As a sophomore, he rushed 90 times for 889 yards and 11 touchdowns, an average of 9.8 yards per carry and returned three kickoffs for touchdowns. He also added 96 tackles on defense.