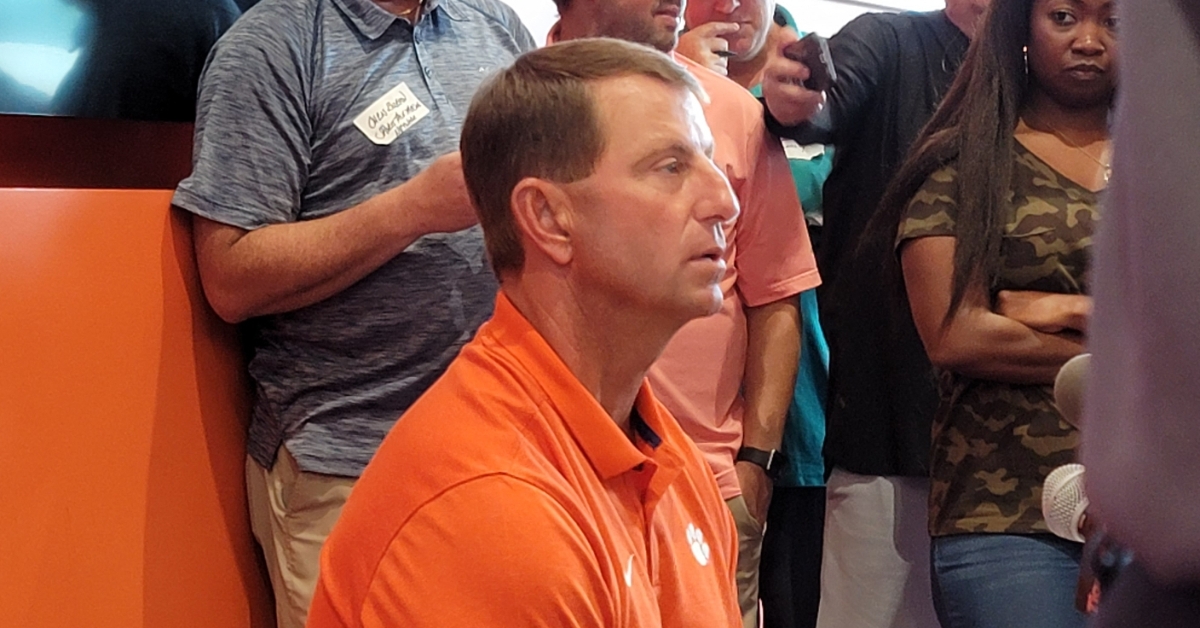 CLEMSON – Back to normal.

Clemson head coach Dabo Swinney and the football staff hosted Media Day at the Reeves Football Complex Tuesday for interviews and to preview the 2021 football season. Swinney said that each team is different and that this year’s squad has both talent and experience after being light on experience the past few seasons.

"I am excited about our team. For me, every team is like one of your children,” Swinney said. “They all have your DNA but they have a different personality and a different makeup and it's fun to see them grow and mature and develop. This team has done a really good job since January. We have a good makeup.

"This is a very experienced team, one of the more experienced teams in a while. We've had a young team the past two years and this team has a bunch of starters back and a ton of lettermen. And we also have a lot of dynamic young players and new guys just getting here. We have some talented second-year players that got some experience last year. But it has been a really good offseason and the guys have been about their business. I think there has been a great appreciation to have a normal offseason and to really train the way they wanted to train. Last year was an unbelievable challenge for everyone.”

Swinney said the coaches are making their last preparations before the start of fall camp.

“We are in our program meetings right now, we will have some media stuff today, and Thursday, and we will do a little bit of recruiting this weekend and finish up our program stuff next week as coaches and then the players will come in,” he said.

Swinney said he believes the Tigers will be OK at the quarterback spot.

“I love the development and I've seen and I'm excited about the depth that we're going to have there in our quarterback position,” Swinney said. “Obviously DJ (Uiagalelei) got some great experience last year. He's a tremendous, tremendous young player. He's hungry to go be the guy, to go do it and I love that. I love that hunger, that's in his eyes.”

"I wish I could tell you we’re all vaccinated but we’re not. Still, we’re in a good spot. A lot of these kids as it gets closer to the season, they really haven’t had any fear of missing out on anything to this point and now there will be motivation to get vaccinated moving forward. Very unfortunate situation with NC State in the CWS. I got vaccinated in March and I’m very thankful I did. We’ve done everything we can to educate them and let them talk to doctors. I trust my doctors. They’re all saying we need to get it. We’re not quite where we need to be as a team but I think we’ll get there. Last year everybody had to mitigate, and now there’s a different option. They aren’t rescheduling games now. They didn’t reschedule that World Series.”

Swinney said the team hopes to have some clarification on Ross at some point in the next few days.

“Anytime you have a complicated medical issue like we had with Mike Williams and so forth and so on, there are always a lot of ‘I’s and a lot of ‘T’s and a lot of people that have to sign off on those types of things,” Swinney said. “So, I think we are at the finish line. We are very optimistic about that.”

Swinney says Ross has had a great summer and is in good spirits and there is nothing that he does not do – lifts, running and training.

“He is really in a good place, and we are hopeful that he will be able to get back out there and do what he loves to do,” the Clemson coach said. “But first and foremost, you want to make sure the medical people feel like he can go play and be safe.”Swinney said he really did not want to address what Ross’ doctors told him when he last met with his surgeon in Pittsburgh back in early June.”