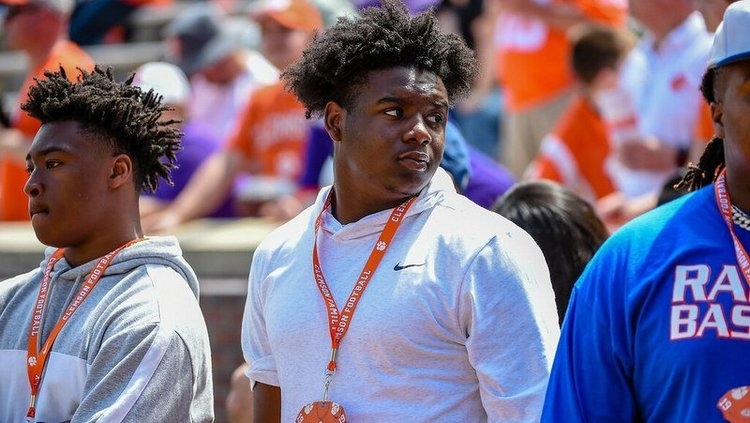 Brandon Buckner grew up attending Clemson games, tagging along behind his father, former Tiger defensive lineman Brentson Buckner. Last weekend afforded the 2021 defensive end prospect the chance to see Clemson from the perspective of a recruit.

Buckner, out of Chandler, AZ, has received offers from Oregon and Arizona State, while schools such as Arizona, Alabama, LSU, Notre Dame, Utah, Oregon State and Cal are showing interest along with Clemson.

“The trip was amazing. Just being on campus and seeing everything for a while was awesome,” Buckner told TigerNet. “The fans, they really came out in the orange and white. Just seeing all of the players running down the hill, that moment is just surreal. I really enjoyed my time down there.”

Buckner’s father, Brentson, was an All-ACC defensive tackle for the Tigers from 1990-’93 and was drafted in the second round of the 1994 NFL Draft by the Pittsburgh Steelers. He played in the NFL for 12 seasons and played in two Super Bowls for the Steelers and Carolina Panthers.

The connection to Clemson started early for Brandon.

“I actually have grown up as a Clemson fan and have been going to spring games since I was a little kid,” he said. “I’ve always been around Clemson football. My dad used to take me to the games and to camps.

“As a recruit, it’s a whole different perspective. It’s fun as a recruit. I’ve been dreaming about this since I was a little kid. I want to be where Xavier Thomas is. I want to run down that hill. Seeing all of that in first person, you get to just soak it in. It’s definitely life-changing being in that moment and looking at it all like, ‘You’ve been dreaming and hopefully, I get the chance to get there.’ It was a good moment for me.”

“The highlight of the visit was just being around the coaching staff, the fans and my favorite football players - Xavier Thomas, Isaiah Simmons, Travis Etienne,” Buckner said. “I’ve watched them all on tv but when you’re there you can see everything and just soak it all in. That was my highlight of the trip.”

Another highlight was spending time with defensive coordinator Bren Venables.

“He brings a lot of good energy to the table. He wants the best out of you and I really like that,” Buckner said. “He talks man-to-man and he just brings a lot of good energy and good vibes and that’s what I like. What he’s done with that program over the years producing talent and developing men on and off the field so they can do great things what their lives. I really like Coach Venables. He’s a really good guy.”

“I like it a lot. They have so much to offer off the field like PAW Journey,” Buckner said. “Jeff Davis, what he’s done offering so many things off the field definitely helps. That gives me the bigger picture outside of football because football doesn’t last forever. That’s what I liked about it. They talked to you about what your plan is after football.”

What would an offer from the Tigers mean to Buckner?

“If I got an offer from Clemson, it would be an honor,” Buckner said. “Running down that hill, that’s all I’ve got say. Seeing the fans, running down the hill, playing in Death Valley, that would be awesome.”

Buckner finished by saying he feels fortunate to have his father leading him through the football process.

“He’s been a big influence just giving me all of the knowledge and the resources that he was given in college,” he said. “He’s passing the torch down to me to follow in his footsteps so I can make a path for myself. I’m just trying to learn as much as I can because he’s been the biggest influence in my life on and off the field. Mentally, physically and spiritually, he has given me the tools to use in life. He’s been there since day one.”

Buckner said he plans to return to Clemson to participate in the Dabo Swinney Camp this summer.