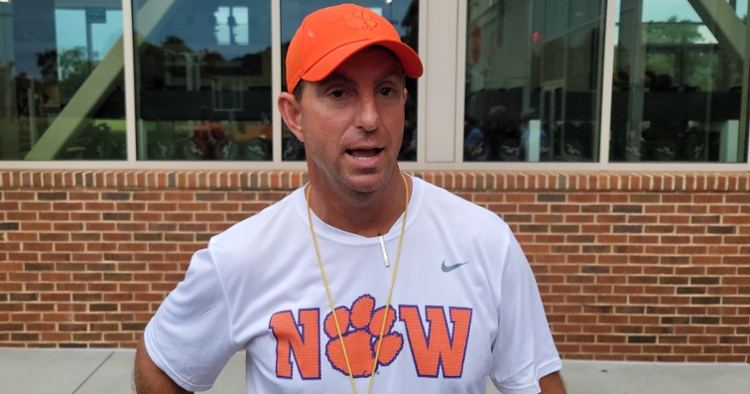 Swinney said that his team has responded in a big way this week.

CLEMSON – Back to work.

Clemson head coach Dabo Swinney told the media Wednesday evening that his Tigers have had a great three days of practice, and he has loved how his team has responded since last weekend’s loss to Georgia. When asked the mindset of his team, Swinney said it was back to work, for the players and the coaches.

Here are the highlights from the availability:

*Swinney said it was hard to believe we’re already in the second week. Great week of practice, lots of focus and energy. Looking forward to Saturday and am excited about being in Death Valley and let them see the stadium full. It’s also First Responders Day and he thinks about 9/11 and where he was and what he was doing that day and the weeks and months after that and he hopes they can honor the First Responders. He also wants to remember the families who lost someone and all of the grief in that horrific moment.

*Swinney said wide receiver EJ Williams “did great” yesterday and today at practice playing through a thumb injury that he was originally going to have surgery on. He was a little sore but looked great and they didn’t see any hesitation at all. Swinney said that is “good news for us and we are excited he will be able to go. Hopefully he can get through the season and after the season is over they can fix it.”

*On the QB depth chart, where Taisun Phommachanh and Hunter Helms are listed as co-starters, Swinney said, “that is a typo. Taisun is the backup.”

*On Justyn Ross, Swinney said that Ross is still the starting slot WR but they can play him anywhere. He said the only other player they’ve had that can cut like Ross was Hunter Renfrow. He is truly unique. That is what is going to make him such a great player, he can play anywhere.

*Offensive lineman Hunter Rayburn is on the verge of taking another step. He can play all five positions and is unique in that way.

*Swinney said the mindset of the team hasn’t been anger, it’s been “back to work. This was one game. I am super proud of our guys. There have been games we’ve won and I’ve not been a happy coach on Sunday and Monday. But I am happy at how they’ve responded. This is a special group. They really care and they are really talented. I really believe this is one of the best groups we’ve had around here.”

*On Andrew Mukuba, Swinney said the freshman’s performance was “super rare. Very rare. Especially at that position. He is incredibly gifted and explosive and his knowledge makes him super rare.”

*Swinney said DJ Uiagalelei has gone back to work. He owned the performance last week. “This guy is a special guy. A special player and a special person. He responded in a tough environment and played really well. He was one of the first ones over here Sunday watching tape and has had a great week of practice. Just like any great competitor, you pick yourself up and go back to work.”