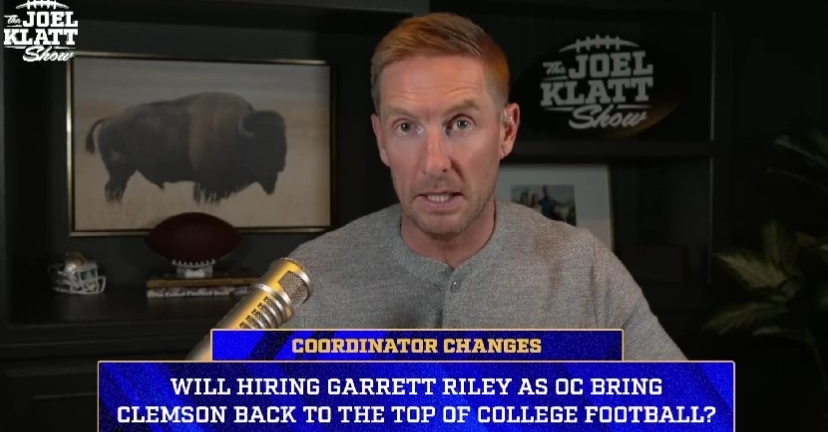 FOX Sports lead college football analyst Joel Klatt hasn't always had the rosiest of headlines when it comes to talking about Clemson football.

He's a big fan of the move by Dabo Swinney to change offensive coordinators and bring in Broyles Award winner Garrett Riley, however, after some lackluster offensive figures in recent years.

“Dabo understands that and this is not a guy that loves to shake things up on his staff,” Klatt said on his podcast recently. “This is a very tight-knit culture at Clemson, it’s one that I’m a big admirer of by the way. What they do with their program is unique and it’s special and the players love playing there. They really do. Coaches love coaching.

“People take shots at Dabo and they think he’s quirky and weird and this and that and guess what? The people that are around Dabo and the players that play for him, absolutely love him. So this is a big departure from that. I.E., firing somebody and bringing somebody else in. So he hires Garrett Riley and Garrett Riley just had a masterful season with TCU. Obviously ended poorly – throw that out the wayside. That Georgia team wasn’t going to get beat by anybody in that national championship game. And here’s Garrett Riley to help save the Clemson offense and try to turn them to the place where they feel like they belong, which is on the upper echelon.

"Remember, in those six seasons, they had six-straight Playoff appearances…They were sixth in yards per play (in that run). Last two years, 96th. Not going to cut it. Here’s Garrett Riley to Clemson and I think that’s a great move for Dabo Swinney.”

Klatt said directly after the season that he was surprised by the Orange Bowl loss to Tennessee, but he felt that the program was in a "decent position" going forward despite there being "a little work cut out for" Swinney.

Part of that work was improvement on offense that Swinney is trying to address.

"Offensively, Clemson was 96th in the country over the last two seasons in yards per play. 96th! Ok, so that has to improve and Dabo Swinney absolutely understands that. He understands that because he’s been to the mountaintop. In the last two years, they’ve lost six games. Nothing to scoff at. They’ve been pretty successful.

Will hiring Garrett Riley as Offensive Coordinator bring Clemson back to the top of College Football? @JoelKlatt explains why this move was much-needed for the Tigers pic.twitter.com/Ucw2zGnCre