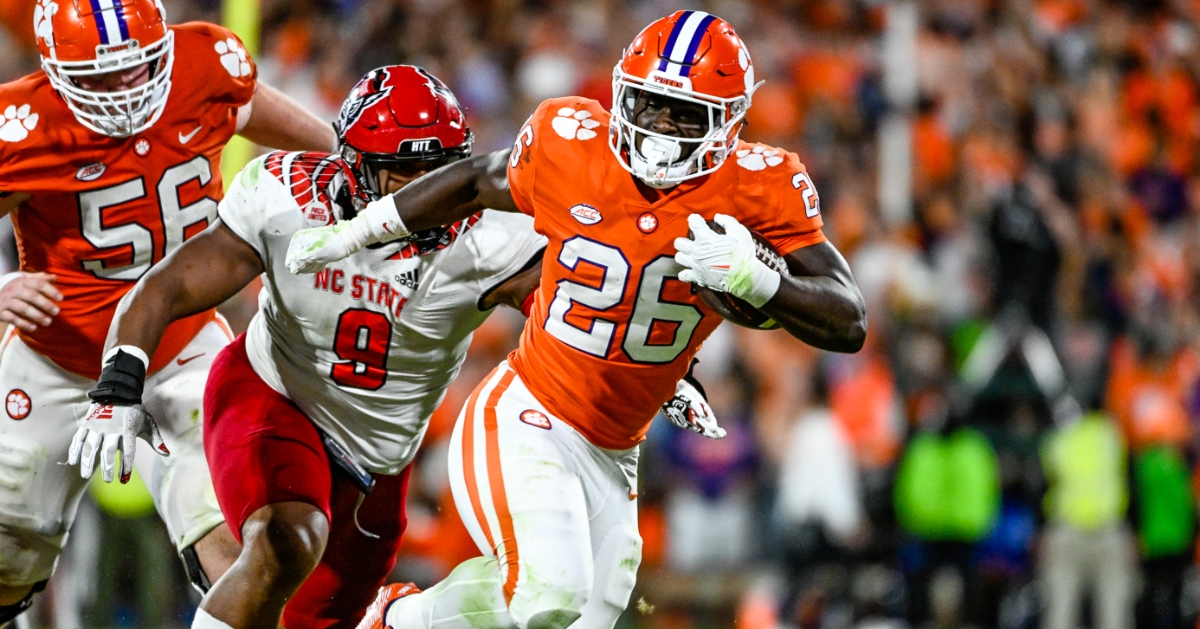 Clemson should lean on its ground game in any matchup this postseason.

CLEMSON - The ACC Championship this Saturday against North Carolina (8 p.m./ABC) has a huge role in determining what bowl game the Tigers will be playing in. After being a part of the Cheez-It Bowl last season, and winning 20-13 against Iowa State, they are hoping to be in a more prestigious bowl this year.

The common projection for the Tigers is to play in the Orange Bowl. This is the game they will play in if they are able to beat the Tar Heels.

North Carolina has the edge in points scored per game, with an average of 37.1 to Clemson’s 34.3, as well as averaging over 100 more passing yards per game. But Clemson has a statistical advantage in the rushing game since they are averaging 188.8 rushing yards per game. Furthermore, the Tar Heels are giving up an average of 169.7 rushing yards per game, which should certainly be an advantage for Clemson. According to Vegas Insider, the Tigers have a 74.6% chance of winning the game. But if they win the ACC Championship and go to the Orange Bowl, it is still a question of who they will play.

Up until recently, Tennessee was the popular contender to face Clemson in the Orange Bowl. However, in a recent report from the Athletic’s Stewart Mandel and Nicole Auerbach, they broke that the Rose Bowl is considering taking Penn State over Ohio State in the Rose Bowl if the Buckeyes fail to make the playoffs. If Ohio State was not in the Rose Bowl, they would play Clemson in the Orange Bowl and Tennessee would be knocked to the Cotton Bowl.

The Tigers have played in the Orange Bowl a total of seven times, winning five. Their most recent appearance was in December 2015 when they beat Oklahoma 37-17.

In a scenario with a loss Saturday, it is unclear which bowl game Clemson would be participating in. In projections with North Carolina losing to Clemson, they are projected to play in the Holiday Bowl, the Duke’s Mayo Bowl, or the Cheez-It Bowl. Florida State and NC State are also projected to play in one of these games. Therefore, if Clemson were to lose to the Tar Heels, they would take the place of North Carolina in one. If San Diego's Holiday Bowl is the destination, the loser of the ACC Championship is projected to end up playing Oregon.

Clemson relies the most on their run game. So, no matter what bowl game they end up playing in, they need to run the ball to control the game. Tennessee’s run defense is ranked No. 19 in the country, while Ohio State is No. 23 and Oregon is No. 31.

The weakness of Clemson’s defense is its passing defense, ranking No. 74 in the country. This is a problem, particularly if facing Tennessee. The Volunteers are ranked No. 3 in passing offense, averaging 332.3 passing yards per game. Ohio State is No. 15 and Oregon No. 16 in passing offense.

Tennessee and Clemson have played each other 18 times, with the Volunteers winning 11 of those games and one tie. However, these teams have not played against each other since 2004 when the unranked Clemson beat No. 6 Tennessee 27-14 in the Peach Bowl.

The Tigers probably have the best chance, statistically speaking, against Oregon. In Clemson’s 122 seasons, they have never faced the Ducks. Furthermore, they have never played in the Holiday Bowl. They have faced the Buckeyes plenty lately though. These two have gone against each other five times, four of them within the past ten years. The most recent time when the Buckeyes faced the Tigers was two seasons ago in the CFP Semifinals, where Clemson lost, for the first time in the series, 49-28.