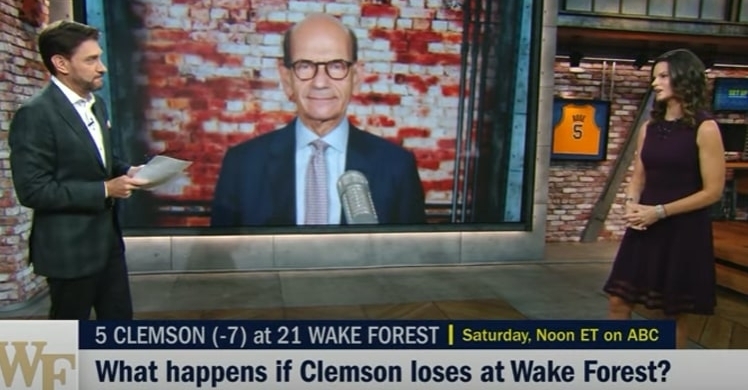 ESPN's Heather Dinich isn't convinced Clemson is the best team in the ACC.

ESPN's 'Get Up' morning show had Paul Finebaum and Heather Dinich on to discuss Clemson's impact on the ACC having a Playoff team and also hit on whether the Tigers are playing like a football final four team currently.

"If Clemson loses this game (at Wake Forest Saturday, then the ACC's place in the Playoff becomes in jeopardy immediately," the network's Playoff reporter Dinich said. "Because when you look at them, they're going to need help to win the Atlantic Division and their schedule isn't great. They need Notre Dame and South Carolina to finish with respectable finishes in the CFP's top-25. Because you've got USC out there -- maybe Texas, other Power 5 conference champions with potentially better resumes."

"(Clemson) is still a mystery. They haven't done anything yet, but I'm gonna go the Cliff(s)Notes version...if they lose this game, it's over," Finebaum said regarding the Playoff for Clemson. "I don't care what South Carolina does. I don't care what Notre Dame does. Just cross off the ACC. Say a prayer for them. They (Clemson) are the best team in the conference..Clemson really is (the ACC's) shot."

"Are they the best team in the conference?" Dinich answered back. "Because I haven't seen anything yet that shows that. They've been beating up on teams with the last name Tech so far. They have a lot of questions in my mind. They may not win this game. This is why we're asking this question."

For the record, ESPN's own data gives Clemson the fourth-best shot at a Playoff bid currently (36%) and a 78% chance to make the CFP with a single loss and an ACC title.

Catch the whole segment below: