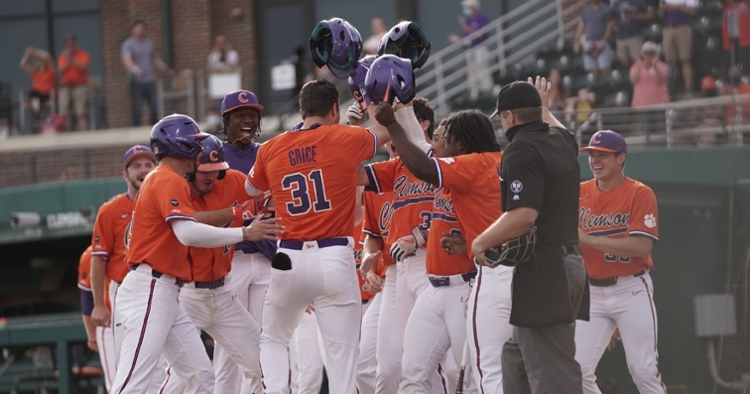 True freshman Caden Grice hit three home runs and the Clemson Tigers baseball team opened its weekend series with a win against the No. 4-ranked Louisville Cardinals on Friday inside of Doug Kingsmore Stadium, 11-3. The Greer, South Carolina native became the first Clemson player since Tyler Colvin in 2006 to register eight RBIs in one game.

As a team, the Tigers hit four home runs as the Clemson bats put up double-digit runs for only the fourth time this season. Grice paced the Clemson offense, going 3-for-5 at the plate. Sam Hall also had a nice day at the plate, hitting 1-of-3 with a home run and three runs scored and two RBIs.

Reigning ACC Pitcher-of-the-Week Mack Anglin started his fifth game of the season, and pitched himself yet again another gem of a game. The Ohio native backed up his 6-plus inning outing last weekend with another stellar performance on the mound, tossing 7.0 innings of one-run baseball and struck out nine while allowing five hits. The redshirt freshman is nowf 2-2 on the season.

"It all starts with Mack Anglin on the mound. I'm really proud of him and how well he pitched for us tonight," Monte Lee told reporters postgame. "He pitched like a true Friday night starter...And then offensively the key quite honestly was the first inning. Hall draws the walk, bunt for the basehit, Parker with the basehit and we got Caden up there and he attacked a first-pitch strike for a grand slam.

"Obviously Caden is going to be the storyline for tonight and he had a special game with three home runs and pitched. He's a special player and he does special things when he has a bat in his hands...It was really a great team effort. We played some great defense...The two guys who deserve the credit for tonight are Anglin and Grice. Those guys were phenomenal for us and it's great to get a win against one of the best teams in the country at home and we had a great crowd tonight and appreciate them supporting us."

The two teams will meet again Saturday at 3 p.m. where game can be seen on ACC Network Extra

The Cardinals got on the board first Friday, using a one-out double to score the game's first run after back-to-back walks to open the game.

Clemson responded and claimed the lead in the bottom of the first 4-0, scoring four runs on one swing from the freshman Grice on a grand slam with no outs. The Tigers loaded the bases after a leadoff walk from Hall and two consecutive singles from Kier Meredith and James Parker.

The Tigers added another run to their lead in the next inning, as the second baseman, Hall, launched his second home run of the season over the left field fence and increased the Clemson lead, 5-0. The homer hit the facade of the ceiling out in the stands in left field, and carried 390 feet.

Grice smoked his second long ball of the game in the third with one out, his 10th four-bagger of the 2021 campaign. The Tigers increased the lead out to 6-0 on the Cardinals in the nation.

Clemson drew back-to-back walks to begin the fifth, and with one out, Grice recorded his third of his hat-trick of home runs. This one was a no-doubter off the bat and drew the oohs and aahs from the Clemson faithful in the stands, as the ball landed 447 feet later and was crushed off the bat with an exit velocity of 112 mph. The Tigers picked up another run with two outs thanks to an error by the Cardinals third baseman, and took a 10-1 lead into the sixth.

The Tigers added their 11th run of the game in the seventh, as Hall recorded his second RBI of the contest and increased the lead to 10.

Dual-position athlete Grice came in to pitch in the 8th inning and struck out the side. Louisville moved a runner over to third with two outs, but a nice curveball from Grice froze the Cardinals batter for strike three to get out of the jam.

Louisville plated two runs in the ninth but a flyout to center field ended the threat.

HE DID IT AGAIN! @CadenGrice3 becomes the 15th Tiger in history to hit three home runs in one game! ??

What can't this guy do?! ?? @CadenGrice3 tosses a scoreless eighth inning with two strikeouts! ??