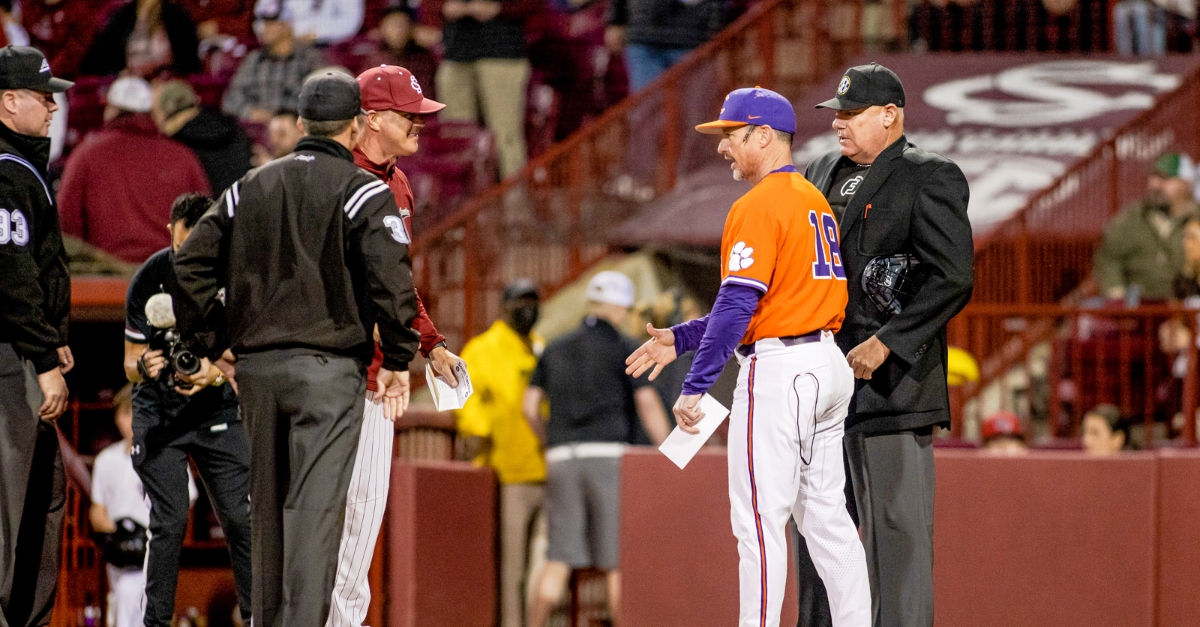 Mark Kingston and Monte Lee will be on the same side of the Palmetto State rivalry now, per multiple reports.

Former Clemson baseball coach Monte Lee is headed back to the other side of the Palmetto State rivalry.

Lee is joining the South Carolina Gamecocks staff for an assistant coach role.

The College of Charleston graduate coached as an assistant with South Carolina from 2003-08 before going back to his alma mater for his first head coaching job.

Lee was hired at Clemson in 2016, where his Tigers won an ACC Baseball Championship and hosted three NCAA regionals.

That’s as far as Clemson went in the postseason, however, and he was fired after missing the NCAA Tournament in a second consecutive campaign this offseason. Lee went 242-136 as Clemson’s head coach. He was replaced by former Michigan head coach Erik Bakich.

Lee will have some familiar company after former Tigers Jonathan French, Ricky Williams and Dylan Brewer transferred to the Gamecocks in the offseason.

He joins South Carolina head coach Mark Kingston's staff, who has been with the Gamecocks since 2018. Lee went 9-6 against Kingston in the rivalry series, including a series sweep in 2022.

COLUMBIA – University of South Carolina baseball coach Mark Kingston has announced the hiring of Monte Lee as associate head coach/recruiting coordinator for the program. Lee, who was an assistant coach for the Gamecocks from 2003-08, replaces Chad Caillet, who stepped away from the program due to personal and family reasons.

“I would like to thank Chad for being everything we hoped he would be,” Kingston said. “His work has set us up to be very successful as we move forward. We admire his decision to meet the needs of his family and wish them well moving forward. We are fortunate that Monte is available to return to the Gamecock family. I have respected his work for a long time, and welcome his passion, experience, and knowledge to our team. I look forward to many great days ahead.”

Lee, who has had 19 winning seasons in his 20 years as a full-time NCAA coach, most recently was the head coach at Clemson University for seven seasons (2016-22), garnering a 242-136 overall record and leading the Tigers to four NCAA Tournament berths. Lee coached nine All-Americans, including at least one All-American in six of his seven seasons, and had 34 players drafted a total of 38 times at Clemson. He coached Max Wagner, a Dick Howser Trophy finalist and ACC Player of the Year, in 2022. Clemson won the 2016 ACC Tournament, going 4-0 in Durham, N.C., helping the Tigers to a No. 7 national seed in the NCAA Tournament. The Tigers then won 42 games in 2017, hosting a regional for the second-straight season. Lee’s first five teams at Clemson all received perfect 1,000 APR scores.

“I am super excited to come back to Columbia and help Coach Kingston, the staff, and most importantly the players in our pursuit to get back to Omaha,” Lee said.

Lee is no stranger to Columbia, as he was an assistant coach with the Gamecocks under Ray Tanner from 2003-08. Lee helped the Gamecocks to the NCAA Regional all six years as an assistant, including College World Series appearances in 2003 and 2004 and Super Regional berths his four of his first five seasons. The 2004 team won 53 games, including the 2004 SEC Tournament, going a perfect 4-0 in Hoover. The Gamecocks won an SEC East Division championship in 2003, going 19-11 in league play. Lee also coached Justin Smoak, who set school records for home runs (62), RBI (207), walks (151) and total bases (485).

He began his coaching career as an assistant (2001-02) at Spartanburg Methodist College. The 2002 squad totaled a school-record 51 wins, while the 2001 team played in the NJCAA College World Series. Lee also was the head coach of the South Carolina Diamond Devils AAU team in 2002 after serving as an assistant coach in 2001.

He became the first position player drafted in Cougar history when the St. Louis Cardinals selected him in the 39th round in 1999. He played 82 games over two years (1999,00) in the minors.

Lee, who received academic all-district honors as a senior, earned his bachelor of science degree in elementary education from College of Charleston in 2000 after playing four seasons of baseball and two years of football at Lugoff-Elgin High School in Lugoff, S.C.

Lee is married to Eryn Garn Lee and the family has four daughters, Madie, Shelby, Blaire and Alexa.