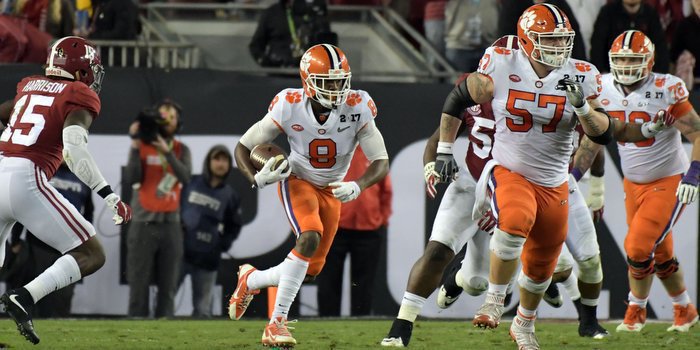 It's difficult to lose players like Mike Williams and Artavis Scott and still feel great about a position, but that is where Clemson is at wide receiver. This is a testament to how they have recruited in recent years at this spot. This is WRU.

One of the most important players this spring is Deon Cain. The rising junior missed last spring but can take the next step to being the superstar he can be this spring. Cain has as much ability as any receiver in the nation, but consistency is the next step. I thought he was a big part of the national title game against Alabama. If Cain can continue to come along and develop, he could be the next first round pick from this position.

What else can you say about Hunter Renfrow? All he does is make big catch after big catch. He is simply the most reliable option the new quarterbacks will have this spring. Renfrow runs great routes and showcases world class hands. It will be interesting to see how his role changes without Williams and Scott. Renfrow is one you don't have to worry about. He will show up and work hard and improve again this spring.

Ray Ray McCloud has shown us both sides of his ability. At times he has looked like the five-star prospect, he was billed coming out of high school. At other times he has looked like a player who has trouble with concentration. The ability is there. The consistency is the next step. McCloud can be as good as he wants to be and this spring is the first he will enter as a starter at his position.

Cornell Powell has star written all over him. He does so many things well. The only missing from last season was experience and opportunity. Look for his numbers to jump this season due to the new opportunities. I love his size, speed, athleticism, quickness and hands. I will be very interested to see how he progresses this spring.

Trevion Thompson finally will get a longer look at more reps this spring. He is coming off of an injury but has given the staff signs so far. In his first three years, Thompson has steadily gotten better each year. Can he take the next step? He will have to in order to compete with this talented group.

Diondre Overton was a surprise last season when the staff decided to take his red-shirt off. He has so much potential as a deep threat and jump ball receiver due to his basketball background. Overton still has to make gains in his size and strength, but the upside here is through the roof.

T.J. Chase needed a red-shirt season to change his body, and he did that by adding 20 pounds. We saw very little of him in the fall, so this spring will be his first shot to make a big impression.

Tee Higgins and Amari Rodgers won't be here until the summer, but when they get here, they will make an instant impact. The only receiver that I have seen come to Clemson with Higgins' ability is Sammy Watkins. He has everything you could ask, and it is packed in a 6-5 frame. Tiger fans will love this star from day one. Rodgers is a great talent and a better person. He will compete, and I expect to make an immediate impact as a true freshman.