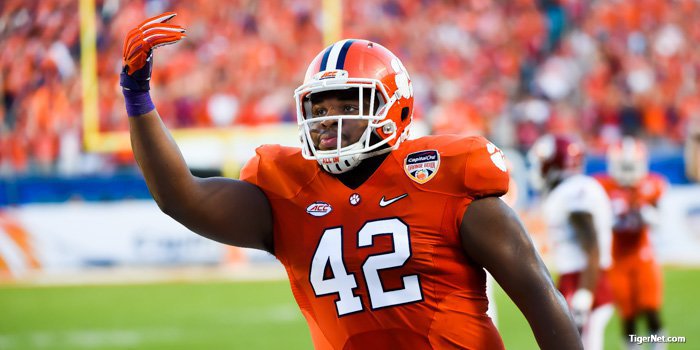 Several years ago, I tried to use my radio show or this blog as a forum to rally the fanbase. I tackled the Woo Hoo. I took on student attendance. I tried to support basketball attendance. But over the years I realized I had no influence and gave up fighting a fight I couldn't win. I also have just about given up on trying to sell trap games and upset alerts.

However, I have not given up on taking orders from the head man and reminding fans what he said. This week Dabo said, "Our fans are Death Valley. There is no Death Valley without our fans, and the standard is kinda been set high, and I know there is a lot of people or some people out there that aren't happy with playing a noon game and we don't have any control of that. Sometimes I think people don't understand that. I love night games too, but we don't have any control of that. That is what I tell my players. We got to play great whenever we play if we play at noon, three, eight, nine, one in the morning, we got to play great. That's what we are supposed to do. I would say the same things to our fans because they make such a huge difference. A huge difference. We started the Louisville game out with two penalties in a row right out of the gate."

I got the message Dabo and I will be there.

What he has done is enough for me to put aside my dislike of nooners. I will enjoy this one and I will not take any of this for granted. Deshaun Watson has only four more games in Death Valley. I will cherish them.

Clemson has won 23 of its last 24 games. The Tigers have won 19 straight games at home, a school record and the longest active streak in the nation. Clemson has won 42 consecutive games against teams who were not ranked. The Tigers have won 12 straight conference games, tied for the longest active streak of its kind in the nation. These are the good times. I will be there once again Saturday soaking more of this in.

"So my message to the fans is this week is that same fervor and intensity and will to win and spirit we had at 12 at midnight against Louisville, we need it at 12 noon against NC State," Dabo said Tuesday. "This is a huge game. It's a battle of first place in our division. It gives us an opportunity to get to 7-0 and stay on course to accomplish our goal and win this division. That's what we got to do so we can have the opportunity to go play for the ACC championship. We don't get many home games. I want to challenge our fans to show up and let's be ready and let's get up and eat a biscuit and be ready to roll."

I heard you loud and clear, Dabo. I am all in Saturday and will be as loud as I was in the Louisville game.

I thoroughly enjoyed watching Clemson's big play offense in Boston Friday night. No one was surprised they came from players like Wayne Gallman, Mike Williams, Deshaun Watson, Jordan Leggett and Deon Cain. What I really enjoyed seeing was the burst by Tavien Feaster on his long touchdown run.

It appears Feaster is behind Gallman, Adam Choice, C.J. Fuller and Tyshon Dye on the depth chart at running back. Maybe he is not the natural kickoff return specialists and maybe he doesn't play well without the ball, but Feaster brings a different gear to the backfield and Clemson could use his explosiveness in the running game.

In over 40 years of watching football at Clemson, there have been some changes on game day and new traditions get introduced. I love Tiger Walk. I also like the team interlocking arms and walking to the goal line in pre-game warm ups. I am a fan of Deshaun going to the corner of the end zone to fire up the crowd right before kick off. But my favorite of the new traditions the past two seasons is watching Christian Wilkins sprint to the end zone to celebrate with his teammates after a touchdown. This would normally be a penalty, but Wilkins is on the extra point team, so he gets on the field to block for the PAT. Wilkins has an infectious personality and his enthusiasm towards his teammates after a score always puts a smile on my face and is a big reason he will always be one of my favorite Tigers.