South Carolina took two out of three from Clemson in the baseball series this past weekend. The Gamecocks won 6-0 in Clemson on Friday night and 8-0 in Columbia Sunday. Clemson's only win in the series came on a 6-3 victory Saturday in Greenville.

The Gamecocks have won 20 of the last 28 games in the series. New head coach for South Carolina Chad Holbrook also won his first series against the Tigers.

The Tigers looked silly against four Gamecock left-handers this weekend. Jordan Montgomery got things started Friday night with eight scoreless innings. In his start he allowed only three hits and two walks while striking out nine.

Tyler Webb came in to close out Friday's win by striking out all three batters he faced.

On Saturday Adam Westmoreland came in relief and allowed only three hits and one unearned run in his 4.1 innings. The big left-hander had nine strikeouts and no walks.

On Sunday Nolan Belcher had a complete game shutout where he allowed just three hits. He had seven strikeouts and did not walk a batter.

For the weekend, Clemson had 22.1 innings against the Gamecock left-handers and only had nine hits and one unearned run. The Tigers had only two walks and 26 strikeouts in those 22.1 innings.

In the Gamecocks two wins, the left-handers allowed only three hits each game and shutout the Tigers on each team's home field.South Carolina Review

On Wednesday Clemson lost at home to Winthrop in 11 innings. In that contest Clemson faced three left-handers that allowed only four hits and two runs in seven innings. The lefties had no walks and six strikeouts.

The only lefty starter Clemson has beaten this season was Robby Sexton from Wright State who allowed two runs in 5.1 innings.

For the season Clemson has faced four left-handed starters and are 1-3 in those games. The Tigers have faced lefty starters for 27 innings and has had only 12 hits, three runs, five walks and 24 strikeouts.

In Friday night's 6-0 win, the Gamecocks had to make only four ground ball outs. Clemson struck out 12 times and flied out or popped the ball up 11 times for outs.

The Tigers were bitten by the unearned run this weekend. On Friday night five of South Carolina's six runs were unearned due to two awful errors.

On Sunday the Gamecocks had five more unearned runs after a dropped humpback liner.

For the weekend, South Carolina scored 17 runs but only seven were earned. The Tigers' miscues allowed ten unearned runs. 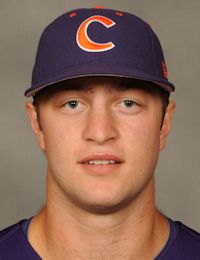 Garrett Boulware
So. Catcher
#30 6-1, 210
Anderson, SC
View Full Profile was thrown out at third on his double. Steve Wilkerson 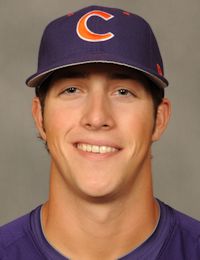 Steve Wilkerson
Jr. 2nd Base
#17 6-1, 195
Roswell, GA
View Full Profile had the other double Friday night. Boulware had another double Sunday. For the weekend Clemson had only three extra base hits and no home runs.

South Carolina did not have an extra base hit Friday night but had three home runs and five doubles on Saturday and Sunday.

For the weekend the Gamecocks had the only three homers and had eight extra base hits compared to Clemson's three. 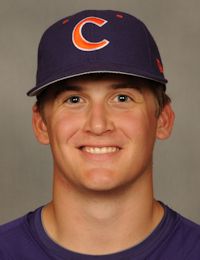 Clate Schmidt
Fr. RH Pitcher
#32 6-1, 190
Acworth, GA
View Full Profile was one of the few bright spots for the Tigers this weekend. He had a gutsy performance in Greenville on Saturday when he went seven innings and allowed only two runs on five hits. Schmidt allowed two walks and had five strikeouts.

Schmidt won the Bob Bradley Award for the most valuable Clemson player in the series this weekend.