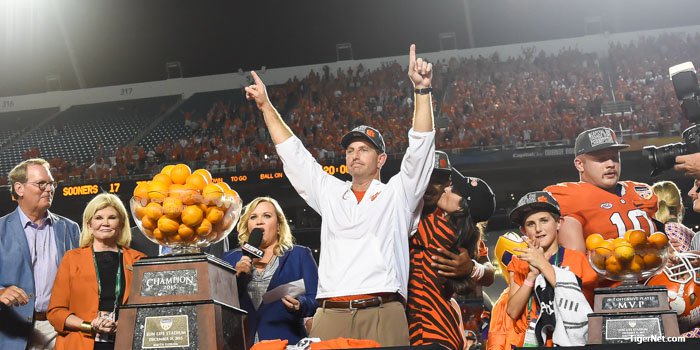 I met with the Charleston County Clemson Club last Thursday night, and I told them Clemson was going to win the national championship. Then I softened it by adding, "if not this year then soon."

I must admit this is not an original thought. Dabo Swinney made that statement in Arizona before the Tigers lost in the national title game last season and I firmly believe this.

In my mind, each season now begins like the fans who were in attendance at a game where Nolan Ryan pitched. He had 773 career starts from 1973-1991, and he threw seven no-hitters. Every time he took the mound you knew there was a chance at a no-hitter. You couldn't have expected the next start to be one, but if you were watching that night, there a chance that game could be the next no-hitter. Every pitcher has a shot a no-hitter just like every team in the country has a chance to win the national title in football. However, Ryan always had a better shot at one, much like powers like Clemson and Alabama now do in football.

This next shot is the best I have seen in my lifetime. When Clemson won the national title in 1981, no one thought they had that shot. In many seasons since then, they have had that shot at a second title, but this is clearly the best chance I have seen.

Dabo has put this program in rarified air. Clemson, Alabama, Ohio State, LSU, Florida State and a few others are programs that have that chance this season, and several of those have that opportunity in the foreseeable future.

No one knows what will happen this week. If we did, it might not be as fun. Some national powers will disappoint, others will surprise, but this window of opportunity will not be closing at Clemson anytime soon.

I am not naive enough to believe Clemson will always be this good. I know there will be a disappointing season with Dabo at the wheel. I also know he won't be here forever and who knows how the successful the next guy will be?

So as I get ready for game week and the opening of the season, I do so with unwavering enthusiasm. I have promised myself that I will enjoy every win and savior this great time in Clemson football history. I know that it is not a guarantee that this kind of era will ever happen again, but I also believe this program is on more of a solid foundation than ever before and the long-term outlook is brighter than ever.

Sometimes I still have to pinch myself. Can you believe we are who we are and where we are? Can you believe we get to watch Deshaun Watson make another run at the Heisman? We get to see Wayne Gallman attempt to break his school record. Mike Williams is back, and so is Deon Cain. We get another season of Artavis Scott, Ray Ray McCloud, Hunter Renfrow, and Jordan Leggett. Can you believe some think we have the best offensive line in the country? Can you wait to see Christian Wilkins and Dexter Lawrence line up on the same defensive line? Can you wait to see Ben Boulware tear someone's head off? Can you wait to get your first look at Trayvon Mullen? This is it. It is here, and we are blessed to be here to take in this 2016 season. And before you know it we will ask about how many days before the 2017 season begins. And that's not a bad thing either.

Go Tigers! See ya in Auburn.