This past week we witnessed Dabo Swinney 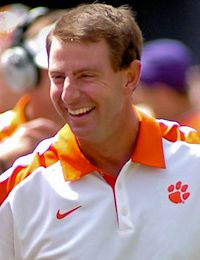 Dabo Swinney
Head Coach
View Full Profile at his media golf event and I thought we saw was another example of a maturing head coach who understands how important it is to modernize your program in today's environment.

Dabo seems to be maturing as his football program matures. He has changed and his program has changed with him.

He was brilliant in his very first introductory press conference when Clemson named him the interim head coach back in 2008 and still shows that often times five years later. But today his message is coming from a more experienced, wiser man.

Being the head football coach at a major college in today's world is a lot different than it was just a few short years ago. More so now than ever, running a football program is closer to running a business. In the old days after you finished playing, the jocks just moved on to coaching. Today it's much more about approaching it like running a business.

There is no better example of that than the way Alabama head coach Nick Saban runs his program. Burton Burns, the associate head coach of Alabama, told me Saban could be the CEO of a fortune 500 company. Now, it doesn't hurt that his plan also includes a bunch of four and five star future NFL stars but he still runs it as a business.

What I heard from Coach Swinney on Tuesday was a lot of the same thing. If you only read the quotes and didn't hear the voice, I think you would have read a lot of Saban in what Swinney had to say. Swinney talked about the process instead of the results. He talked about eliminating noise. He talked about preparing everyday. He talk about challenging yourself in a classroom, the weight room and the practice field and when you do success breeds success and often times that shows out on the field. Dabo was speaking Sabanese. Modernizing the Program

Gone are the days of the former dumb jock coaching after his playing days are over.

What Swinney has been able to do is sell. He sold his vision to Terry Don Phillips and now continues to sell it today to Dan Radakovich. He sold it to Clemson president Jim Barker and I would be shocked if the new president doesn't get the same sales pitch. Swinney sells it to the Board of Trustees as well. Swinney has a good relationship with several members of the board and this is a key aspect in the trust they have in each other.

If you were going to make a business plan for football program this would be the blueprint. Have a vision and sell it to those who can help you make it happen.

You've heard the saying the game is not about Xs and Os, it's about Jimmys and Joes. That still holds true but acquiring those Jimmys and Joe's has changed.

The most successful companies have adapted to today's new business environment. Successful football coaches have had to do the same thing. We now live in a world where social media is just as important as television and radio. Twitter is now a major factor in recruiting. Players try to add followers and It's a way for them to compete against each other off the field.

So like fortune 500 companies, football coaches and there staffs have had to adjust their business plan. There other examples of modernizing a football program and Swinney seems to understand many of those examples.

This is still a people business but how you reach those people and how you manage those people has changed. As college football evolves, I am glad that we have Swinney as the CEO of Clemson football.