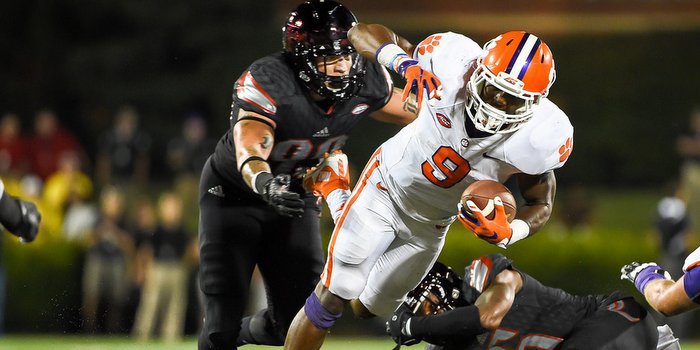 Due the awkward Thursday night time slot and travel on Friday, I am putting out our thoughts on the Louisville game today.

It was not a great game where the Tigers played well, but there were a lot of positives to come out of the game Thursday. Clemson got a win on the road in a fairly difficult place to play. The Tigers won despite not playing their best on offense.

Defensively, Clemson held the Cardinals to 16 first downs, 272 total yards and 19 yards on the ground. There is an old saying in football that says, "run the ball and stop the run." Clemson out rushed Louisville 202-19.

I thought a big key to the contest was which defense could get off of the field. The Tigers held Louisville to just 2-14 on third down conversions.

Clemson's front four played a terrific game. The Tigers had five sacks including a late sack by Kevin Dodd

Ben Boulware
Jr. Outside Linebacker
#10 6-0, 241
Anderson, SC
View Full Profile was all over the field. The secondary gave up a couple of big plays, but also forced the issue and made a couple of picks.

Wayne Gallman
RS So. Running Back
#9 6-1, 210
Loganville, GA
View Full Profile had perhaps his most impressive outing with 139 yards on 24 carries. Gallman was perhaps the player of the game on offense for a team that had to be able to run the ball to win on the road. That was perhaps the biggest question mark I had coming in.

Deshaun Watson
So. Quarterback
#4 6-2, 207
Gainesville, GA
View Full Profile was not the superstar we had gotten used to seeing, but he still played well enough to win. He was 21-30 for 199 yards with two touchdowns and two picks. He also rushed for 54 yards.

Watson made a few mistakes we had not seen him make. His two interceptions were into double coverage and bad decisions. He also under threw a wide open tight end in what could have been a game clinching first down.

It is clear to me that Watson misses Mike Williams

Germone Hopper
RS Jr. Wide Receiver
#5 5-11, 175
Charlotte, NC
View Full Profile has also been an inconsistent target. In fact, throughout much of the second half Clemson went with the second team receivers and freshmen in Ray Ray McCloud, Deon Cain

Clemson's offensive line played fairly well considering the the starting center missed the game and the Tigers were down to their third team right tackle in the first quarter.

Special teams were a mixed bag Thursday. On the positive side, Greg Huegel

Greg Huegel
Fr. Punter / Kicker
#92 5-11, 180
Blythewood, SC
View Full Profile made both of his field goals that turned out to be a big key. However, the game would have been a double digit win if it were not for the 100-yard kickoff return for a touchdown.

In summary, it was a win. It was a hard fought road win on a Thursday night on the road in a fairly tough environment. It was also a win that might have had a different result a few years ago.

Now this team gets a week off to prepare for sixth-ranked Notre Dame in what could be the most anticipated game ever played in Death Valley.