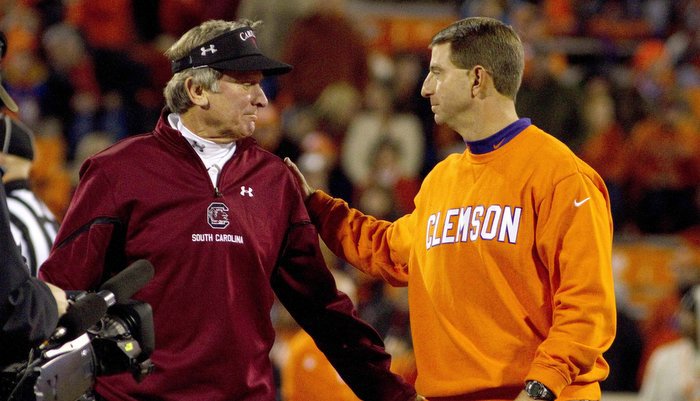 I listen to you nearly every day. 73 yr old early riser. My wife not morning person. Put earplugs on and drink my coffee, listen and read paper cover to cover. I am a Gamecock. Until your most recent rant about spurrier, I thought you were usually fair and informed.

It's not seen as a character plus to kick someone who is down. He is an old man!

SOS is down. It's not like you to take cheap shots at people or to demagogue an issue. That rant was a cheap shot. Are your ratings down ? Then I could understand. PS. I practiced law in Maryland for well over 400 years. I believe in being profitable.

USC has a very good President, and a board of successful business folks and intelligent members. They were unanimous in the spurrier deal. Look at their resumes and then yours. Who am I gonna side with ?

One final note. I probably watched 100 football games or more this year. Not in a single game did I see receivers regularly running as free in the secondary as those of Alabama. Yet your DC got a big raise and is touted by some at your station as being the best in the country. The Gamecocks sucked and they moved the ball as well ag Clemson as anybody else they played. Maybe you should ask him what happened.

I am sure it doesn't matter what the resumes loom like because you were going to pick a Gamecock.

Clemson allowing Alabama big plays was not the shocker of college football season in this state this year. The Citadel took care of that storyline. If you wanted to ask any coach about how something could happen, I would say you should ask Shawn Elliott about The Citadel.

Sorry for kicking you while you were down.

It was my impression that for the offense to hum at maximum efficiency, Clemson needed a mobile quarterback to run the show. So I was a little surprised to see the 5* quarterback Hunter Johnson, who is a pure pocket passer, commit to Clemson. Educate me.....what is the thinking with bringing him in? Is he going to become mobile?

Have you seen Johnson's film? He is very mobile. He is a much better athlete than I realized. Also, he is such a polished passer that you can't turn down a five-star passer like this. Johnson is a rare arm talent.

Do you know the dates for spring practices and the spring game?

The first day of spring practice is February 29. The spring game is April 9.

I agree with your questioning why were Syracuse and Pitt specifically added to the ACC. The only feasible reason I can come up with is to provide a broader base of viewing eyes once the ACC Network is up and running---should it ever occur! These 2 schools have brought nothing to the ACC IMO. Their football programs are mediocre at best and their basketball programs have added little if anything. In the case of Syracuse they've further embarrassed the league with their NCAA infractions and their conduct in the 2014 football game at Death Valley where they harassed our flag girls as their dumb coaches stood by and watched. Fact of the matter is that their 2 major programs had no interest in joining the ACC but the SU administration forced them to join to receive the big payouts they now receive. Their fans are pains in the .....rude, crude and only interested in themselves without any particular ties to the ACC.

Pitt had a decent football season in 2015 but that's the first one. They also tend to be rather crude to say the least and I question why they wanted to join absent the big financial payouts they receive. For the life of me, I cannot think of a single thing other than the one noted above that they bring to the league. The ACC would be far ahead to get rid of them and put 2 schools that really WANT to be in the ACC.

Thanks for the email. It would have been nice to see West Virginia instead. I just don't see many advantages of these northern based basketball schools.

I don't see anything irrational about your frustration with Clemson baseball the last seasons. Our year's performance was mediocre at best. Irrational behavior would have been not making a change in leadership.

The last nine years were below the standards set for the program. I am extremely excited about the future of the program. It may take a couple of years, but this staff will win.

I am confused, so please help me understand.

I watch football games a lot, and I note one apparent "change" that I don't understand.

For years, when a player called for a "fair catch," he put a hand in the air to signal his intent.

Am I missing something, but I don't see the hand in the air anymore. If I am right, how does the official and opposing players know the player's intention?

The punt returner has to put his hand in the air and wave it from side to side to give the clear signal. That is the way I have always known the rule.