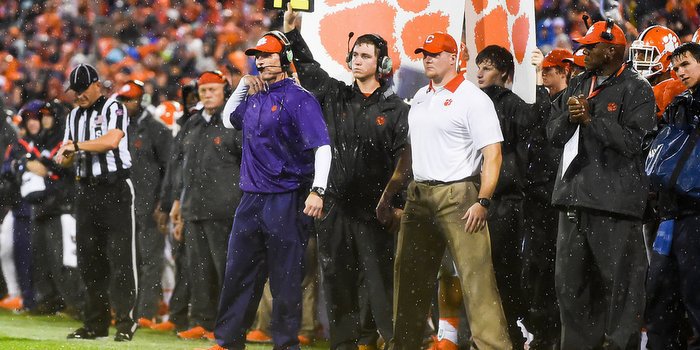 I have gone back and watched games starting with the NC State to look at the defense. Giving up huge running plays over the past five games seems to be a pattern and with Hood coming, it raises a big concern. What stands out is the positioning of the linebackers. Is it the defensive calls or are Boulware and Goodson simply making bad decisions? One play in particular in the USC game where Goodson tackles the running back and Orth runs right past him. The poor tackling against USC is correctable, but if the linebacker play continues, I believe we will be is serious trouble. I wanted to get your opinion and to see if you are seeing the same.

The idea behind the zone read and option that gave Clemson fits is to trick the defense. That is the goal of the scheme. Several times Clemson has looked bad against each of those schemes, but you have to give the offenses credit. You have to play assignment football and stay disciplined. Clemson did not do that well in the Syracuse game and South Carolina game. The FSU big play came on a simple play, but you have to give Cook a lot of credit for that kind of power and speed. Sometimes it has been linebackers and their fits. Sometimes it has been the defensive linemen. A major issue is the back four being out of position too. There has been enough blame to go around, and it is clear Boulware has a bad shoulder. Hood is a great back, and Logan is a big-play specialist, but I think Clemson will be focused and play well.

A life long tiger. My son will graduate in May from Clemson. That will be four generations of Tigers (Grandfather,Father,Self, and Son). I was at Clemson when we won the National Title. So I am either confused, or my memory is fading. However, I remember on Thurs. or Fri. watching the JV team play the opponent we would play on Sat. in Death Valley. Have I lost my mind? My son tells me I'm crazy. Also, I thought an Oculus was supposed to throw am Orange Paw in the sky. Live in Rock Hill so I am unable to listen to your show but read all your blogs on TNet. Thanks for your time. Enjoy your input. PS: My Daughter could not get in Clemson but was accepted at USC, well I did the honorable thing and sent her to college out of state. Thanks for all you do.

No, you are not crazy. Colleges had freshmen teams at times and JV teams at times. When the NCAA started to limit scholarships, the need for a JV team went away.

I am not sure about the Oculus and what they have planned for the future, but I have not heard that.

As I stated last week in this forum, the game against South Carolina was one that was a very, very tough one to win and while the result was great, the judges from Russia and France deducted massive style points. Let's admit that the South Carolina players had a possible once in a lifetime experience of being able to tell their children that they not only beat their rival but beat them when they were the #1 team in the country but thankfully, that did not happen. Let's also admit that since the Florida State game Clemson, has not always looked like a #1 or honestly even a #10 team but the undefeated record and the dream live on.

There are several questions that will be answered this. Can Clemson forget South Carolina beat North Carolina and show 100% respect to The Heels? Can the defense regain its pride and swagger in time to beat a North Carolina team that may be the best offense they have played? Will the Clemson defense learn that you cannot leave the middle open and not expect really good running backs and an exceptionally good running quarterback to have huge games? Hopefully, changes will be made on the defensive side of the ball because if thousands of television viewers can see that the middle of the field is not covered, North Carolina coaches can without a doubt see that. I hope Clemson fears North Carolina especially on offense and the kicking game and that we can get enough defensive stops to allow the Tiger offense to do what they do.

I agree that South Carolina had a great opportunity and played well but couldn't pull it off. Clemson has not played at a high level in the past three games, but that is very difficult to do consistently. I expect Clemson to be focused and play well Saturday. UNC is hard to defend, but I expect Clemson to play well defensively. The Tigers are aggressive with their safeties and that sometimes leaves open areas. I don't think Clemson fears UNC, but I think it has a healthy respect. In the end, I feel Clemson will be energized and play well Saturday night.

Here are some stats to show this. UNC only played one team that is in the

top 5 in the ACC in either rush defense or pass defense. Pitt is #3 in rushing

defense and UNC rushed for 174 yds against Pitt (55 yds below their avg). All other

teams are #6 or below in rushing defense. VT is #3 in pass defense and UNC

passed for 205 yds against VT (61 yds below their avg). All other teams are

#6 or below in pass defense. When the UNC offense has been challenged

this year they have not stepped up to the plate. And they will be challenged

by the Clemson D.

On the passing side, the same result. Clemson has played the #2 (BC) and #4

(FSU) pass defenses in the ACC. Against BC: Clemson passed for 249 yds

above the BC avg allowed per game. Against FSU: Clemson passed for 112 yds above

the FSU avg allowed per game. When Clemson is challenged, Clemson has stepped up.

I think you make great points. It is pretty clear Clemson has played a much more difficult schedule and has been tested more. The stats you mentioned are interesting, but I think something you didn't mention is more important, UNC has not been in a big game like this. One of the UNC websites suggested this is their biggest game ever. When was the last time the Tar Heels played in a big game? Meanwhile, Clemson has played LSU, Ohio State, Oklahoma, Georgia, Notre Dame and FSU. I think experience in preparing for big games is a huge factor.