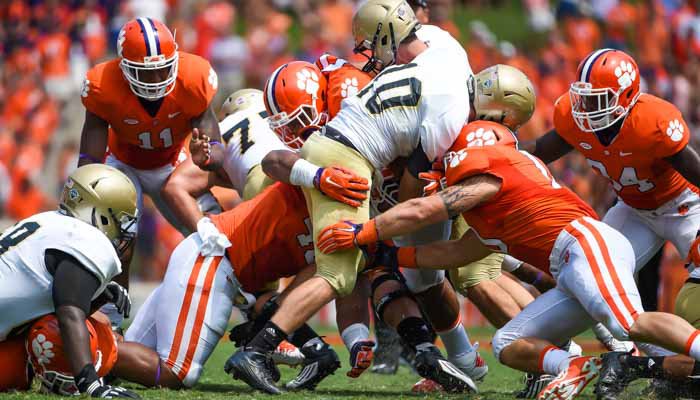 I read Thursday's blog and it sounded like this weekend will be a struggle. How can you talk about how great App State is and how this will be a war? Did Lou Holtz or Vince Dooley write the blog Thursday?

I expect Clemson to win Saturday, and I expect it to be a convincing win. My point was that this is not another Wofford. The Terriers are down and App State is not. Clemson could have scored 70 on Wofford. The Tigers scored on every drive Watson was in the game. This App State team is better than Wofford, Boston College, Syracuse and Wake Forest. Vegas has the spread at 17, and I think Clemson will cover, but this is a better team than Clemson saw last week. I can see Clemson winning 42-17.

I read your blog, "Weapons" today. I have to agree with your comment, "Also, the tight ends will help give the staff options in the passing game." I suggested the same thing on a Clemson thread on Sunday after we learned Mike Williams

Mike Williams
Jr. Wide Receiver
#7 6-4, 213
Vance, SC
View Full Profile will have a lengthy recovery time. I do remember Leggett on a key block, but I don't recall us using any of the TEs as receivers on Saturday, but I might have missed it.

Leggett caught one and was a target on another Saturday. I like the tight end because it is a tough matchup for a linebacker due to speed issue and safeties due to the size issue. However, every time you throw it to a tight end is one less time you get the ball to Artavis Scott

Seth Ryan
RS So. Wide Receiver
#85 5-11, 174
Summit, NJ
View Full Profile is the Holder for field goals and extra points, why does Dabo have him catching passes in a game? Seems like we are already thin in the specialist department.

I doubt we would ask a guy only to be a holder. Usually, it is a backup quarterback or receiver. I don't think Ryan will be in the game often as a receiver unless it is mop up duty, so this shouldn't be a big concern.

1. We did what we were expected to do, win and win big - testament to Dabo's philosophy of playing to a standard

2. We are in serious trouble if Deshaun goes down. We scored on every possession with him and punted on the majority of the others. Bryant looks promising, but Nick doesn't seem to have the mobility.

3. Offensive line - too early to tell. I think Louisville will be their first real test.

4. G-Hop, best game since he has been here - his downfield blocking was spectacular.

5. Ray-Ray - Wow-Wow; Deon - no more first game jitters - another Sammy and Nuke combo in the making - Just need some dreadlocks!

6. The defense was disciplined, which is what I was hoping to see against a GaTech type offense. I feel better about them.

7. Mackenzie is a great cover guy, but he needs to learn how to play the run.

8. Jayron is a beast - he will be in the Pro-Bowl one day

10. Pretty sure Tiger Walk is not the full team

I read your blog "Drop Off" today. I agree. I tried to explain why there might not be a drop off to my son recently. I made the following argument. Only one guy can play a position at a time. So, who do you choose? Last year, we chose seniors over underclassmen. Does that mean the seniors were better? Yes, that is probably true. However, it tells the critics from ESPN nothing about the difference between the #1 right DE and the #2 right DE, or any other players. On a scale of 0 to 100, Vic Beasley

Shaq Lawson
Jr. Defensive End
#90 6-3, 272
Central, SC
View Full Profile might have been a 99 in 2014. Fingers crossed there is hardly a drop off or maybe none at all. I like our chances with Venables in charge.

This staff has recruited very well. There is depth in the program at most positions. Now, Beasley was a freak athlete and can't be replaced, but Clemson is talented. Experience is an issue now, but the talent is not. Lawson, Pagano, Watkins, Wilkins, Huggins, Dodd, Yeargin, Bryant, Boulware, Goodson, Alexander, Kearse, and Green are very good football players.