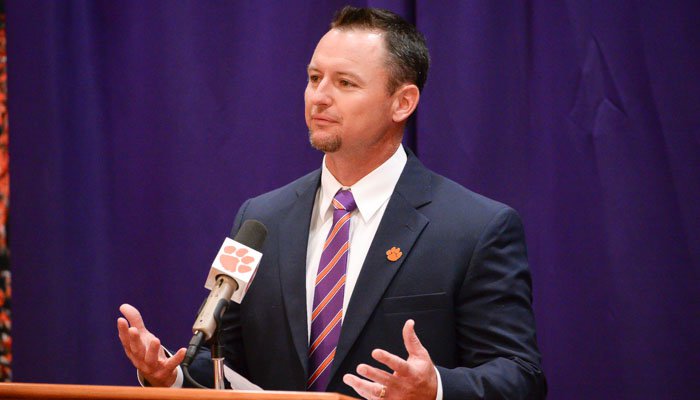 Ahead of the Plan

When Monte Lee was a candidate for the head baseball job at Clemson I talked to a few people who knew him because I wanted to get a feel for what he brought to the table. Clemson needed a change and Lee was that change. He sounded different than the previous coach, but I didn't realize how different until five minutes before the first pitch of the season.

In the home opener, Lee strolled out to home plate and exchanged lineup cards. After discussing the ground rules, he leisurely strolled back to the Clemson dugout. There were no dog piles or any coaches or players pushing each other around outside the dugout.

In the bottom of the first, Lee stayed in the dugout while his third base coach went down the line. This was different. The park felt different. It felt relaxed and fun.

Personally, I was worried about the team Lee would field that opening weekend. There was no Crownover or Erwin. The pitching staff had been depleted. The third baseman was at second. The second baseman was in center. I had no idea what the bullpen would look like. There were major holes in the rotation, bullpen and lineup.

Midway through the season I heard William Qualkinbush perfectly describe the job the staff had done when he said the season was being held together with duck tape and glue.

But they kept calm and kept searching for answers. As Lee said, "We just kept trying to go out there and play the game the right way." That answer reminded me a little of Bill Wilhelm.

Fast forward to Sunday and Monday of this week and like many Clemson baseball fans, I am on top of the world. For years I had complained that Clemson was not winning ACC titles. Sunday the Tigers won their third conference title in 20 years.

I had complained that the standards for Clemson baseball were ACC titles, home regionals, national seeds, home super regionals and trips to Omaha.

The last time Clemson hosted a regional was 2010. I wanted dog piles after games not before them.

Two things really excite me about this program now. First, is the idea that the staff has the program two or three years ahead of where I thought they would be. I considered this a rebuilding job and wasn't expecting ACC titles and national seeds until 2018 or 2019.

The other aspect of the program that really has me excited is the future. I was in Charleston this year when the Tigers swept The Citadel. After the game Lee exclaimed, "We will win this state in recruiting." Lee and his staff have been relentless on the recruiting trail and more answers are coming.

Beating four NCAA tournament teams to win the ACC title was awesome. Watching this team being announced as a host site on Sunday as fantastic. Seeing them named a national seed was another major high on Monday. However, knowing that in the near future talent will take the place of duck tape means Clemson baseball is closer to returning to its standards so much faster than I ever expected.