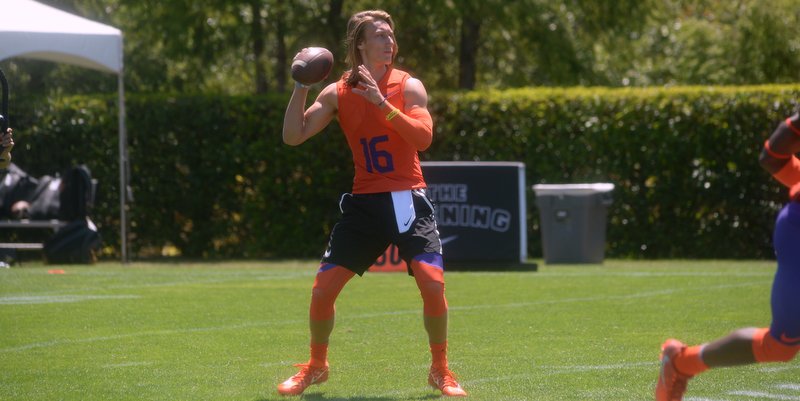 Lawrence maintained a 4.06 GPA while passing for 41 touchdowns with only one interception in 256 passes.

The 6-foot-6, 215-pound senior quarterback passed for 3,296 yards and 41 touchdowns this past season, leading the Purple Hurricanes to an 11-1 record and the second round of the Class AAAA state tournament. The state’s returning Gatorade Football Player of the Year, Lawrence completed 177 of 256 passes and was intercepted just once. A three-time First Team All-State honoree, he broke the state career passing records for both yards (13,908) and touchdowns (161) and has been selected to play in the 2018 U.S. Army All-American Bowl. Lawrence is ranked as the nation’s No. 1 recruit in the Class of 2018 by Rivals.com.

A devoted member of his church community and the Fellowship of Christian Athletes, Lawrence has volunteered locally on behalf of his school’s peer-leadership program and Challenger Football youth team. “Lawrence is a kid who is calm under pressure, never gets rattled and makes all the plays,” said Doyle Kelley, head coach at Cedartown High. “It’s unbelievable the throws that he makes. You have to see him to believe it; he’s just a phenomenal football player.”

Lawrence has maintained a 4.06 GPA in the classroom. He has verbally committed to play football on scholarship at Clemson University in the fall of 2018.

As a Gatorade Player of the Year, Lawrence will be able to select a national or local youth sports organization to receive a grant as part of the Gatorade Play It Forward program. Every Gatorade Player of the Year state winner receives a $1,000 grant to donate and will have the opportunity to enter for an additional $10,000 spotlight grant by writing a brief essay explaining why their selected organization deserves additional support. 12 spotlight grants – one for each sport – will be announced throughout the year.