According to multiple reports, Marcus Edmond 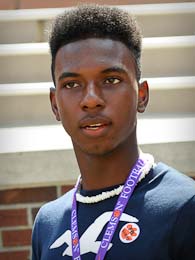 This year, Edmond helped his team by playing quarterback and had over 2000 total yards and 24 touchdowns. On defense, he had 48 tackles and 4 interceptions. In 2011, he had 33 tackles and an interception. He is being recruited to play DB at Clemson.

As a junior, he won the state championship in the 400M dash.

He has the same high school coach as current Clemson DB, Bashaud Breeland. Edmond is a very similar player with good cover skills.