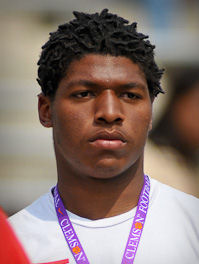 As a junior, he had 79 total tackles, 13 for loss, and six sacks in a injury plagued season. He registered 150 tackles, three sacks, three forced fumbles, three fumble recoveries and an interception in leading Butler to a 16-0 record and its second consecutive 4-AA state championship in 2010. Attended the 2011 Orange and White Game in Death Valley.