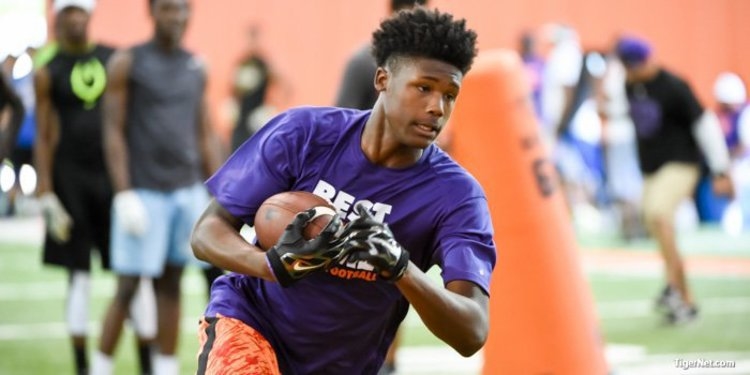 In the high production video, Higgins has a barbecue with friends and families and eventually shoots off fireworks while the Clemson Tiger Paw is the last firework on display.

The 6-foot-4.5, 188-pound Higgins is an elite playmaker by all the major recruiting services and one of the top wide receivers in the nation.

One of the top players in the 2017 recruiting class, Higgins had been a verbal commit to Tennesse before reopening his recruitment. Higgins is a huge miss for Tennessee as he is the No. 1 recruit from Tennessee, and the nation’s No. 3 wide receiver.

TigerNet was on hand for the 2016 Dabo Swinney Camp, and Higgins was impressive, to say the least.

"“It was pretty good. It was pretty fun," Higgins told TigerNet recently. "Just getting to work with Coach (Jeff) Scott on some of the receiver drills really stood out. I think I performed pretty good. I just came off of an injury, so I wasn't exactly full speed, but I think I did pretty good coming off of a hamstring injury."

"That was great," he said. "It was good to work out with those guys. Amari is a great receiver and Hunter is a great quarterback. Being able to be out there with them was a lot of fun."

Higgins is the No. 31 overall player, and No. 5 ranked receiver according to ESPN.

July 4th is another GREAT DAY TO BE A TIGER!!! #WE2DEEP17 pic.twitter.com/gDjChDno40

Words can't explain how excited I am right now.. Congrats to you bro! Can't wait to ball out with you?? @teehiggins5 pic.twitter.com/NVlCkEbprv