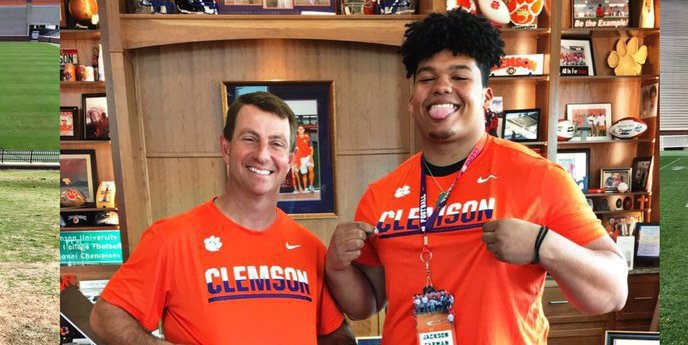 5-star 2018 offensive tackle Jackson Carman from Fairfield, OH (Fairfield HS) has Clemson in his top five according to an interview on Thursday with WCPO Cincinnati.

Recently, he was in Columbus for the Buckeye's Friday Night Lights camp instead of Clemson's All In Cookout. His recruitment appears that it could go down eventually between the Tigers and the Buckeyes for his commitment.

He told TigerNet in early July what he wants in his school choice at the Nike Opening Camp in Beaverton, Oregon.

“It’s going to be the place I feel the most comfortable and most at home,” Carman said. “I am looking for where I’ll be in the best environment, an environment where there is a lot of competition every day. I want a place that will help me reach my goals and where I won’t be distracted, but at the same time will have people pushing me to be my best.”

The 5-star offensive tackle said that Robbie Caldwell is one of the major draws for him at Clemson.

"He is one of the reasons why Clemson has staying power. "Obviously, they are the schools I am looking at the most,” he said. "I wouldn't really say I have a leader right now. I have a great relationship with Coach Caldwell. The whole staff texts me all the time, but Coach Caldwell probably the most. He is a wiser-type of guy. He helps me decipher things. He is more of a grandfather-figure to me."