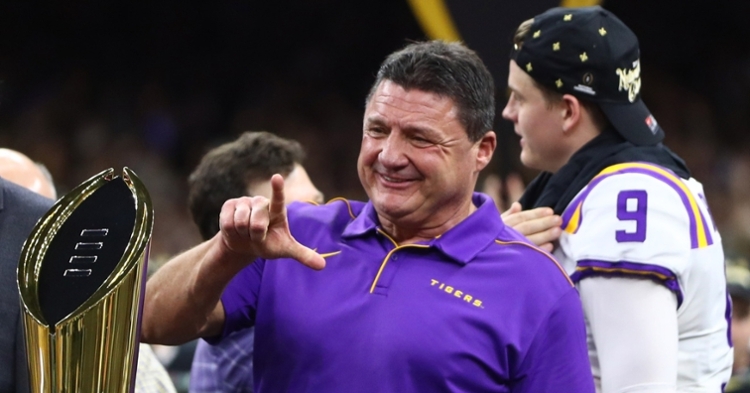 ESPN College Football analyst Kirk Herbstreit was not a fan of LSU's post-game celebration after their 42-25 title win against Clemson on Monday night.

LSU players were smoking celebratory cigars in their winning locker room, and former alum Odell Beckham Jr. was handing out cash to players on the field moments after the game ended.

It was a little too much for Herbie as he talked on an ESPN podcast this week alongside David Pollack and Kevin Negandhi.

"I will say this as much as we’re celebrating this team, I wasn’t a real fan of the postgame stuff, the OBJ stuff with the money,” Herbstreit said. "The way they handled themselves at times. If it’s just about 2019, great, but this is about staying power. This isn’t the finish line of their program. Don’t they want to win in 2020, don’t they want to win in 2021? I almost feel like it’s all the chips in, we made it, that’s it and forget everything else."

Herbstreit thinks the upperclassman at LSU should be a role model for the younger players.

This might be a one-year title run for LSU with several assistant coaches (at least 2) and players (9 or more) headed off to the NFL.

"I thought they showed a little bit of "immaturity and just kinda not knowing how to handle it with the way they celebrated postgame,” Herbstreit said. This is just me personally, this thing is about 2020, and this is about Coach O building a massive program and trying to become the new sheriff in town in the SEC West. And the way his team reacted, I almost feel like everyone’s going to the NFL, everybody’s acting like this is the top of the mountain, which it is for this year, but it seems a little bizarre to me."