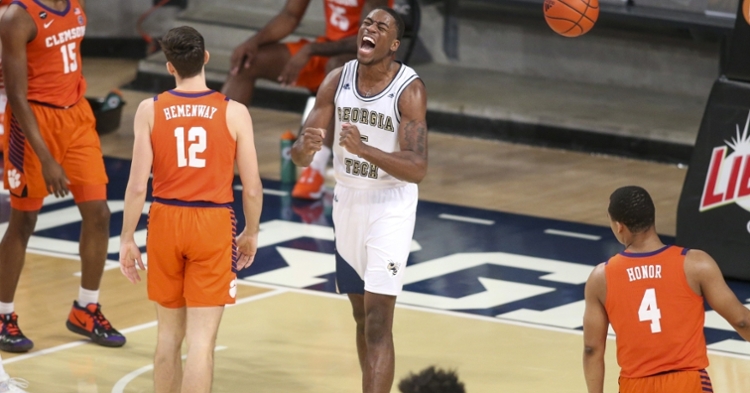 Tough night defensively for the Tigers.

Georgia Tech cruised to a fairly easy victory behind an impressive shooting display with a season-high 16 three-pointers (16-26 overall). It was the second most threes made in a game in Georgia Tech history against a team that was ranked 8th in the nation in defensive efficiency.

Guard Michael Devoe was sensational for the Yellow Jackets with a team-high 22 points (6-for-6 on 3s), six assists, and four rebounds.

Besides the lackluster performance guarding the three-point line, Clemson had 20 turnovers (-10 differential), which is not a good recipe for success on the road in the ACC.

“Our turnovers and [Georgia Tech's] 3-pointers were the two things that stuck out," Clemson head coach Brad Brownell said during post-game availability. "Offensively, we were really good against the zone early in the game, but Georgia Tech was good on offense, too. Their guards are elite players who can really play with great confidence and pace. I didn't think we guarded the ball very well, and their guys started making shots. We need to reexamine some things we're doing defensively."

The Tigers were just not sharp defensively on the road against a hungry team.

"Committing 20 turnovers really hurt us," he said. "We scored easily early on, but we weren't getting stops. The game was too comfortable for both teams, and Georgia Tech did a better job of tightening up. We didn't execute well enough tonight."

The Yellow Jackets were up comfortably 44-35 over Clemson at halftime and led most of the game (33:58 lead time).

Two bright spots for the Tigers moving forward is that they actually out-rebounded Georgia Tech 28-18, and their bench was productive outscoring the Yellow Jackets' bench 17-10.

Clemson has lost two games in a row after recently losing at home to a talented Virginia squad. They have been outscored by 53 points in those two games after COVID-19 paused team activities.

It doesn't get any easier for Clemson as their next game is a road matchup with Florida State on Saturday at 3:00 p.m on ABC.

Clemson vs GT Box Score
Comment on this story