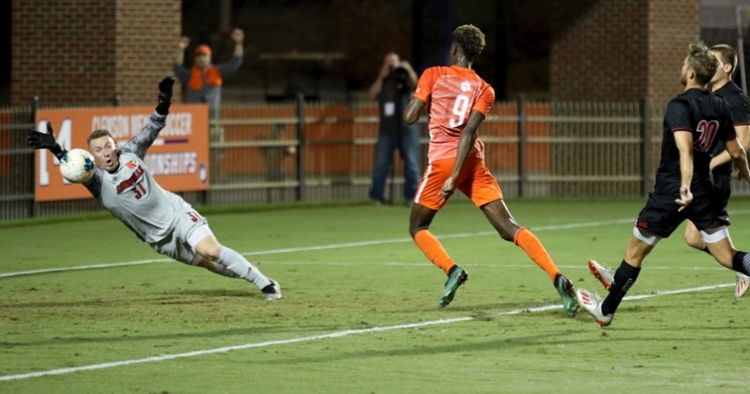 Kimarni Smith had an impressive showing in the win (Photo credit: Allen Hodges)

Clemson, S.C. – A dominant performance by the 11th ranked Clemson men’s soccer team resulted in a 4-0 victory Friday night. Behind a brace by Kimarni Smith and four points by Robbie Robinson, the Tigers improve to 10-1-1 on the season. Smith’s two goals in the match bring him to 13 on the year, a mark with ranks first in the country.

The opening 10 minutes of play saw a flurry of opportunities orchestrated by the Tigers. A shot by Phillip Mayaka opened the doors for Clemson, as they would go on to log six in the first half.

The first goal of the game came in the 26th minute, with Robinson sliding behind the Cardinals’ backline as they attempted an offsides trap. Mayaka spotted the effort by Robinson and rewarded him with a leading pass, allowing Robinson to fire a shot into the goal, beat the Louisville goalie and giving Clemson the 1-0 advantage.

The second goal of the first half cames as Smith slotted away a beautiful series of combination passes between Mohamed Seye and Robinson within Louisville’s 18-yard box.

“We know that Kimarni has this quality in him,” said Head Coach Mike Noonan on Smith’s scoring prowess. “He was here all summer and we are not surprised by the quality he has shown this year. We are all very proud of him.”

The second half of play saw a continued dominance by Clemson, as the team spent a large portion of time creating chances in Louisville’s defensive third. The Tigers’ defense and midfield orchestrated beautiful cross-field passes throughout the second half, continually providing Clemson’s attackers with high-quality opportunities.

The string of passes paid dividends in the 62nd minute, as Robinson fired a shot directly at the Louisville goalie that resulted in a loose ball landing on Grayson Barber’s foot. Barber capitalized on an open net to slot home the Tigers’ third goal on the night.

With 10 seconds on the clock, Smith charged past the Louisville defense and was tackled from behind in the 18-yard box while attempting a shot. The referee awarded a penalty kick for the foul and Smith converted the opportunity, placing the ball to a corner that the Louisville keeper was incapable of saving.

“I talked to the guys before the game and my message was pursuit. We want to always be hungry and look for more. Everyone on our team was doing that tonight, from our starters to our subs,” said Noonan.

George Marks had another strong performance in net, pulling defenders into the correct positions and leading the Clemson defense to letting a mere three shots on goal. The result moved Marks to 8-1-1 on the year while posting his sixth shutout.

Clemson now looks ahead to their match at Syracuse on Saturday, Oct. 19. The trip to play the Orange will be their lone away match before returning home to face Radford on Tuesday, Oct. 22.

Relive the 4? goals from last night's thrilling victory over the Louisville Cardinals!#ClemsonUnited pic.twitter.com/Z4YUbYt5oj